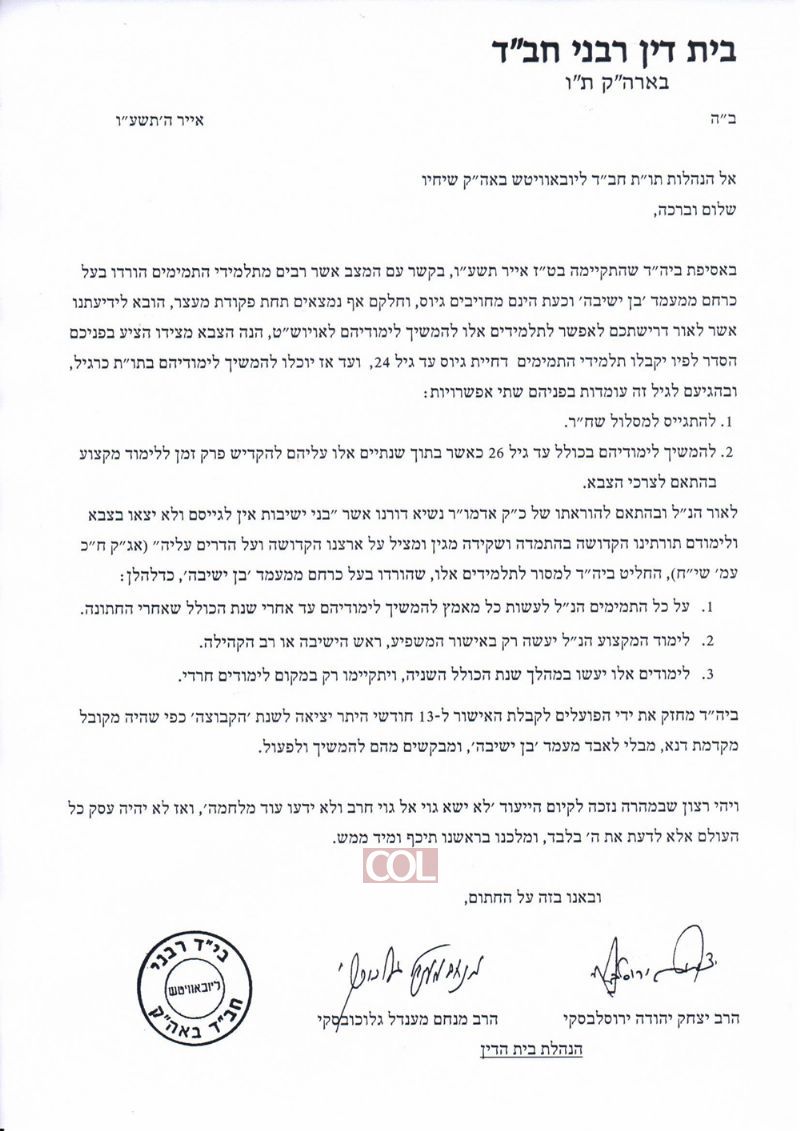 Many in the chareidi community have the belief that Chabadnikim willingly enter the IDF. In fact, a deal that has just been worked out that prompted prominent Chabad Rabbonim Shlita to speak out against IDF service. The deal was made during the tenure of former Defense Minister Moshe Ya’alon, permitting bochrim to head to 770 after yeshiva gedola for ‘Kvutza’, thereby delaying induction into the IDF until their return.

Chabad spokesman Rabbi Menachem Brod explains, speaking with Mordecai Lavi of Kol Chai Radio. Prior to the last Knesset, bochrim would learn in yeshiva gedola and then head to 770 for a year of limud known as ‘Kvutza’. As a result of the new draft law when the talmidim return from Kvutza they found themselves listed as AWOL from IDF service, wanted by military police, some locked up.

Rav of Nazareth Illit Rabbi Yeshayahu Herzl added that he is thankful for the partial agreement that has been reached but it is insufficient. Rav Herzl explains it is quite clear, that one returning from Kvutza seeks to get married and then wishes to enter kollel, or continues limudim as a bochur. In either event they are not entering the IDF as this has been the case for years.

Rav Herzl explains he is not against the IDF but the limud Torah is more important and this is what protects the soldiers so for as long as a bochur is still in yeshiva he has no place in the IDF. Rabbi Herzl stresses that any agreement compelling them to enter the IDF upon their return from Kvutza is unacceptable for they must continue limud Torah.

One prominent rov speaking out against the agreement is Bnei Brak Chief Rabbi HaGaon HaRav Moshe Yehuda Leib Landau Shlita, who states if the rebbe would know of the deal he would instruct talmidim to refrain from traveling to NYC for Kvutza rather than serving in the IDF. Rav Landau stated entering the IDF is unacceptable and any agreement that compels the bochrim or avreichim to enter instead of continuing their limudim is unacceptable.

The Beis Din Chabad released a kol korei addressing the matter, reporting on the asifa that was held on 16 Iyar. The beis din points out he agreement permits one to learn until 24 and the he must enlist to a chareidi IDF Shachar program or continue in kollel until 26. However, during the two years in kollel the avreich must engage in studies to learn a profession in line with the needs of the IDF.

The beis din then quotes the instructions of the rebbe, which absolutely forbid military service instead of continuing one’s limudim. Hence, the talmidim are instructed to do everything possible to continue limudim; (2) to study a profession only after receiving the approval of one’s mashpiah; and (3) these studies must be confined to one’s second year in kollel and only in a chareidi environment.