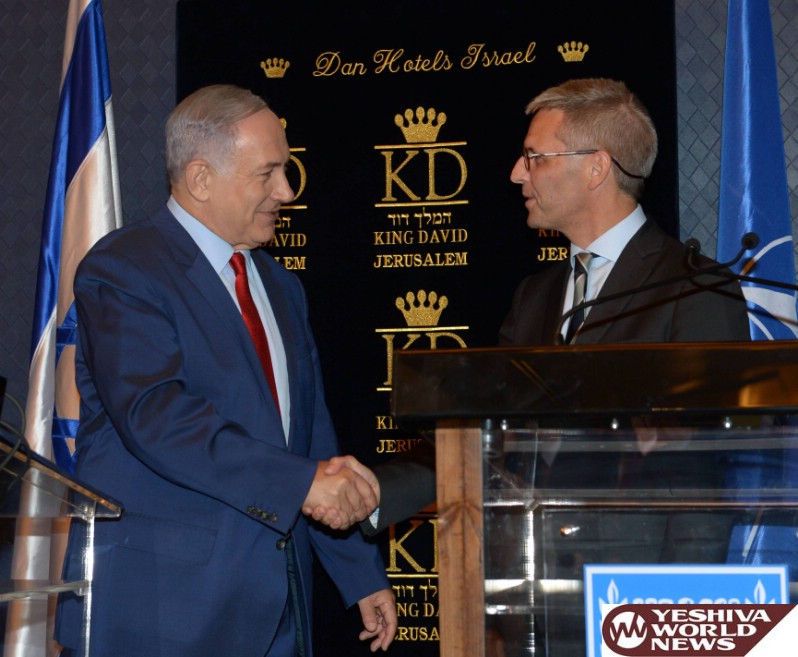 Prime Minister Binyamin Netanyahu on Tuesday 8 Sivan, in Jerusalem, met with ambassadors from NATO member states and told them at the start of the meeting:

“Thank you to all of the ambassadors representing the NATO countries that are here today. I look forward to this opportunity to discuss our common interests, based on our common values. I want to thank NATO for inviting Israel to open an office in your headquarters in Brussels. I called Secretary General Stoltenberg immediately to express my appreciation and I want to inform you that we’re in the process of opening the office as soon as possible. We attach great importance to that. Israel has much to contribute to NATO. I believe NATO has much to contribute to Israel. We’ve already begun that process, but I think we can extend and increase our cooperation.

This meeting obviously comes at a difficult time. Two days ago, a terrorist walked into a nightclub in Orlando and murdered nearly 50 innocent people, men and women. These people were doing nothing wrong. They were dancing with friends and enjoying music with loved ones. The terrorist murdered them because he was driven by intolerance to the LGBT community and driven by hatred for freedom and diversity. Now, days before that, a terrorist walked into a café in Tel Aviv and murdered four civilians. They too did nothing wrong. They were drinking coffee and enjoying the celebration of birthdays. Paris, Brussels, London, Tel Aviv, Jerusalem, Bali, Mumbai, New York, San Bernardino and now Orlando and so many other cities have been struck by the same evil. Terror knows no bounds, and that is why our cooperation in the battle against terrorism must know no bounds as well.

One day ISIS kills gays, the next day Yazidis and then Jews and Muslims and Christians. They have no bounds. Terror, the indiscriminate, systematic attack on innocent people, must always be confronted and must always be fought, and that doesn’t change. In any case, it doesn’t depend on the identity of the victims. It depends on the nature of the act. The act is evil and is perpetrated by people with evil designs, and we, the people of the civilized world, have to band together to defeat it. We stand ready to help NATO in this collective struggle. We are prepared to share our intelligence and our experience to help in this common effort.

Now, in three weeks you’re going to have an important summit in Warsaw and I believe the combat against global terrorism has to be, should be and probably is already a central part of your agenda. Know that Israel stands ready to advance that agenda, and I have no doubt that if we work together, we can roll back this terror, and I have no doubt that we can defeat ISIS. I think it can be defeated. I think with the right amount of international cooperation across the widest spectrum, this goal can be achieved, and I think that if we work together we’ll achieve it faster and we’ll defeat ISIS and terrorism faster.”

“Mr. Prime Minister, It is a great honor for me as NATO Contact Point Israel to welcome you here at the King David. Ambassadors of NATO countries are very grateful that you have given priority to meeting us for discussion of security issues that affect both NATO and Israel.

And one of those issues is of course the scourge of terrorism. Again last week it showed its ugly head in Israel robbing four innocent people of their lives and injuring many more. Allow me, Mr. Prime Minister, on behalf of the whole NATO family to again condemn in the strongest terms these acts of terrorism.

There is no justification for terrorism. Period. And that is true whether it happens in Paris, which again last night was the scene of a despicable act of terror, in Tel Aviv or in Orlando. And if I may address our US colleague for a moment, we all share your grief and your outrage at the horrific massacre in Orlando.

Mr. Prime Minister, our meeting takes place only three weeks before the summit of NATO heads of states and governments in Warsaw. And on that occasion, leaders are going to discuss the future direction and the challenges that we face in NATO to our security and our values.

To the east, there is renewed focus on defense and deterrence. NATO has been obliged to take measures that represent the largest reinforcement of collective defense since the cold war and to the south there is instability. In the Middle East, terrorist groups spread chaos and violence, posing a threat to our security and our way of life.

As one element of that response NATO allies are taking military action as part of the global coalition against Daesh. There are so many threats that are facing NATO that are similar to the ones facing Israel.

Mr. Prime Minister, I am honored to share with you a message from NATO Secretary General Jens Stoltenberg. He says: ‘Israel is a very important partner for NATO. Like the nations of the alliance, Israel is an open democratic society. Today our nations face greater, more complex threats than for many years. It is right that those countries that share common values of democracy, human rights and the rule of law work together for the good of us all. Israel has for many years been an active member of NATO’s Mediterranean Dialogue. The only security forum that brings together NATO allies with Israel and Arab countries. And last month, NATO and Israel went further, agreeing to establish an Israeli mission at NATO. Having a mission will help us to take our political and practical cooperation to a higher level. NATO and Israel are natural partners, and I, the Secretary General, very much hope and look forward to an even closer relationship in the years ahead.’ – Jens Stoltenberg.

And we, Mr. Prime Minister, look forward to our lunch discussion. Welcome.”