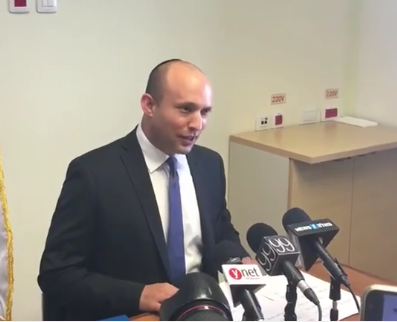 Education Minister Naftali Bennett held a press conference to respond to the words of Rabbi Yigal Levinstein of Yeshivat Bnei David. Rabbi Levinstein was addressing an assembly of over 700 rabbonim and leaders of the dati leumi community from Israel and abroad, using the forum to blast ongoing efforts by the IDF Education Corps to diminish the authority of the IDF Chief Rabbinate and advance an agenda that accepts Reform Jewry, a to’eva lifestyle secularism over observance of Torah and Mitzvos, and female combatants; speaking out in the strongest terms against all of the above-mentioned items.

“Good afternoon. I am not a rav and not going to explain Torah or paskin on halacha but I am a believing Jew who loves the Torah and tries to live by it. I am also the Minister of Education of 2 million students and leader of the dati leumi community. This I do know – halacha is here to tell us what is permitted and prohibited but not to be used as a vessel to divide or label people or sectors.

“We cannot use disparaging language against an entire tzibur and hide behind halacha. This is not acceptable to me and not the way of religious Zionism.

“Life’s reality is more complicated than permitted and prohibited and yes, the Torah has prohibitions but not everyone who transgresses is put outside the camp. Do we automatically kill one who is mechalel Shabbos, has this occurred in the past 2,500 years?

“The Sanhedrin were wise and found a way to uphold the Torah. A Sanhedrin that sentenced one to death in 70 years is viewed as harsh. Were those who lived in Bayit Rishon and Sheni tzaddikim, yet they found the good in everyone and did not judge harshly.

“According to Yiddishkheit, the world is not here to teach us the way but quite the contrary. Rabbi Nachman of Breslov teaches us that a person who seeks the good in others is a better person. We grew up with names such as Hillel Hazakein, Rabbi Akiva, Rabbi Aryeh Levine and Rabbi Kook. These are examples that bring warmth and boundless love to our hearts when we hear their names.

“Rabbi Aryeh Levine saw a soldier cross the street when he saw him and asked why he was avoiding him. He responded that he is embarrassed as he no longer wears a kippa. Rav Aryeh told him I am a plain Jew and do not get that high. I only see as high as the heart. We must be a camp of derech eretz and slow in judging others. The camp I lead believes in Eretz Yisrael, Am Yisral and Toras Yisrael and fight for these values with mesirus nefesh and love all despite color and ethnicity. We are all created in G-d’s image.

“As Education Minister I state clearly all children must know you are all loved and respected and each of you have your place. Chazal taught us wise men are careful with their words…There are those working so chareidim fear chilonim and that chilonim should hate chareidim and try to create a chasm between residents of development areas and residents of yishuvim and between left and right…I have good news. Am Yisrael is not there. Most Jews love one another, the land and the state. The majority makes kiddush but may not keep Shabbos, loves Torah but may not follow every halacha. A varied people does not have to necessarily be a divided one. That is what must unite us, not divide. At time of war we always unite and we must work to do the same during times of peace and I commit to this, to units all sectors of the people. Thank you”.

While not done in the form of a press event, a number of other rabbonim have spoken out against Rabbi Levinstein, including one of the leaders of Tzohar Rabbonim, Rabbi Rafi Feuerstein, who explained the Torah calls for ‘Darchei Noam’ and not shunning others with harsh words and condemnations.