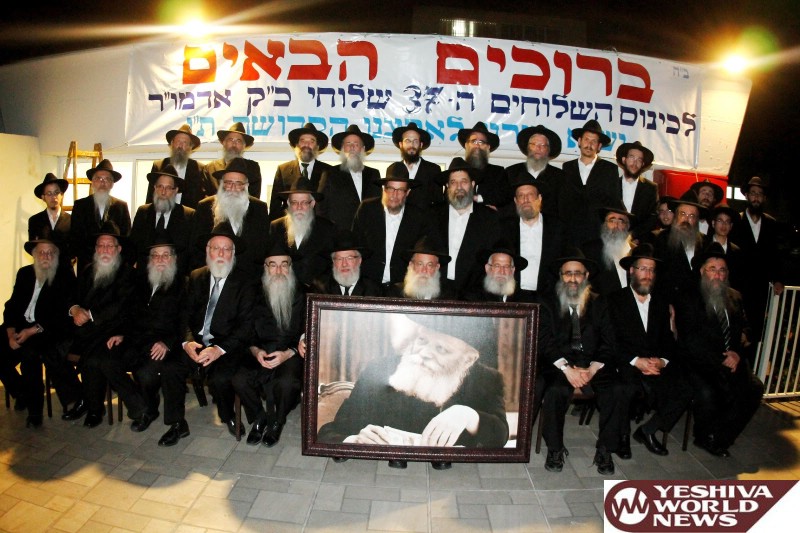 The following statement was issued to the media at the 40th Annual National Conference of the Lubavitcher Rebbe’s personal Emissaries in Israel:

“We, the Israeli emissaries of the Lubavitcher Rebbe, who were personally sent to the Land of Israel by the Rebbe forty years ago in order to “inspire and encourage Jews to fulfill the Torah and mitzvot, and to rebuild the land both physically and spiritually,” include among us both municipal and community Rabbis, heads of yeshivot and kollels, and founders and administrators of educational and charitable institutions.

“We raise a heartfelt cry of painful and vociferous protest against the current situation in the Land of Israel, in which, for the last year, our enemies have unremittingly sought to harm our Jewish brethren – men, women and children – and during which time, the Israeli government has stood by meekly, refusing to respond with force and assertion; continued to freeze Jewish construction in Judah and Samaria, reiterated the possibility of negotiations, and repeatedly declared the necessity of creating “two countries for two nations” – may G-d save us from such plans!

“According to Jewish Law, the mere discussion of withdrawal from parts of the Land of Israel can create a situation of utmost peril to the inhabitants of the country – men, women and children. For the halacha states (Shulchan Aruch, Orach Chaim 329) that even when our enemies attack us over insignificant spoils, “we charge out armed against them, even desecrating the Shabbat to do so.” Hundreds of leading Rabbis from across Israel have already signed a legal verdict stating that every withdrawal from parts of Israel creates a situation of mortal danger to myriad Jews throughout the country, G-d forbid.

“It is perfectly obvious, to all who perceive the situation clearly, that whenever the topics of concessions and withdrawal have been raised in the past, the result was always the same: an increase in murderous activities, attacks on Jewish settlements, and the spilling of innocent blood – may G-d save us!

“Thus, we unanimously support the activities of the Rabbis and Sages of the Rabbinical Congress for Peace – “Pikuach Nefesh,” who, for over twenty-five years, have worked tirelessly against the concessionary policies of the State of Israel, particularly, through wide-spread campaigns to promote public awareness that this approach is forbidden according to Jewish Law, the ultimate goal of which is to maximize the safety and sanctity of Jewish life.

“Based upon the passionate cries of the Lubavitcher Rebbe, in dozens of speeches, presented with deep concern for the welfare of our Jewish brethren in the Holy Land, we call upon the Prime Minister and the government of Israel, as well as all Jews in the Land of Israel and the Diaspora to wholeheartedly support the work of the Rabbinical Congress for Peace – “Pikuach Nefesh,” with every means at their disposal — to help them in this important task of saving Jewish lives in the Holy Land, preventing further negotiations with our enemies over the question of Israel’s borders, and firmly planting in our national awareness that the only path to true peace and security in the Holy Land lies in asserting our rights over the entirety of the Land of Israel. Only then, will we merit seeing the promise: “I will bring peace to the Land . . . and I will lead you upright (Lev 26)

With prayers and hope that the Holy One will put an end to our suffering, and that we may merit the true and complete redemption of our Righteous Moshiach immediately.”