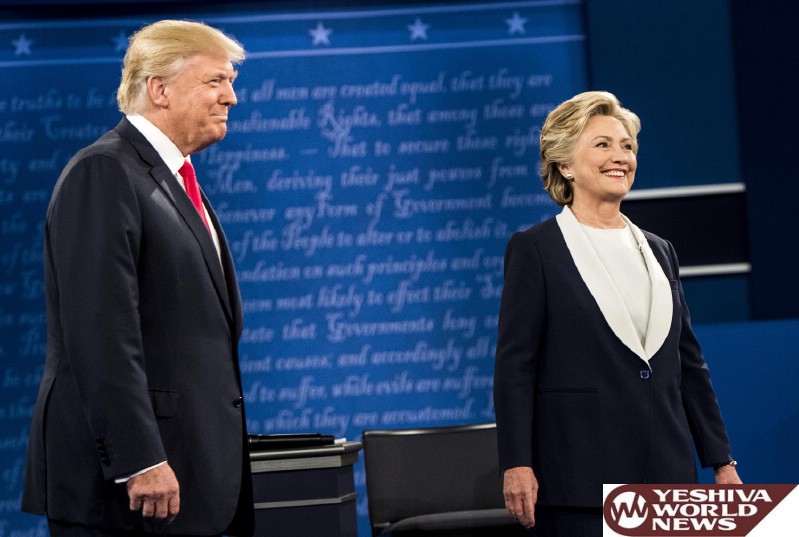 Most voters say they think Hillary Clinton broke the law by using a private email address on a personal server while she was secretary of state, a new Associated Press-GfK poll shows. But those concerns may thus far have been blunted by allegations about Donald Trump’s behavior toward women.

The poll was conducted before the FBI announced Friday it will investigate whether there is classified information in newly uncovered emails related to its probe of her private server. Those emails were not from her server.

Things to know about how “October surprises” for the two candidates are having an impact on the race:

Just over half of likely voters in the poll — 52 percent — think Clinton’s use of a private email server broke the law, including 40 percent who say she did it intentionally. Another 41 percent think she showed poor judgment despite doing nothing illegal, while just 6 percent think she did nothing wrong. Half of voters say her use of a private email server makes them less likely to vote for her.

Clinton has consistently struggled with perceptions that she is dishonest. Just a third of Americans say Clinton is at least somewhat honest, and nearly half say she is at least somewhat corrupt. But Trump performs about equally poorly on assessments of his honesty, and only slightly fewer consider him corrupt.

Just over half of voters say the allegations make them less likely to vote for Trump — similar to the percentage saying the same of Clinton and her emails. But by a 51 percent to 43 percent margin, voters are more likely to say that Trump’s comments in the 2005 video bother them a lot than say the same about Clinton’s use of the email server.

A fifth of Republican likely voters say the allegations about Trump’s treatment of women make them less willing to support him. And within that group, only about a third say they will vote for Trump, with about a third supporting Clinton and the remainder supporting third-party candidates. By contrast, about a fifth of Democrats say Clinton’s email use while she was secretary of state makes them less likely to vote for her, but most of them say they’re ultimately supporting her anyway.

Americans — men and women alike — are about evenly divided on whether Trump’s comments in the 2005 video are typical of the way men banter with each other in private.

Six in 10 voters say Trump is very or somewhat sexist, and nearly two-thirds say he has little to no respect for women.

NOT CONVINCED BY BILL CLINTON ALLEGATIONS

Trump also has tried to equate the accusations against him with charges leveled for years against his rival’s husband, but the poll shows voters aren’t buying the comparison.

Six in 10 say the allegations against former President Bill Clinton have no impact on their vote. That’s despite the fact that 63 percent think Hillary Clinton has probably threatened or undermined women who have accused her husband of misconduct.

Less than 4 in 10 voters say they’ve heard a lot about or are bothered a lot by the contents of emails from Clinton campaign chairman John Podesta being released by WikiLeaks.

Still, 44 percent say they’re less likely to vote for her because of hacked information about what she said during private speeches for which she has long refused to release transcripts.

About the same percentage — 45 percent — say they’re less likely to vote for Trump because he has not released his tax returns.

The AP-GfK Poll of 1,546 adults, including 1,212 likely voters, was conducted online Oct. 20-24, using a sample drawn from GfK’s probability-based KnowledgePanel, which is designed to be representative of the U.S. population. The margin of sampling error for all respondents is plus or minus 2.75 percentage points, and for likely voters is plus or minus 3.1 percentage points.

Respondents were first selected randomly using telephone or mail survey methods and later interviewed online. People selected for KnowledgePanel who didn’t have access to the internet were provided access for free.