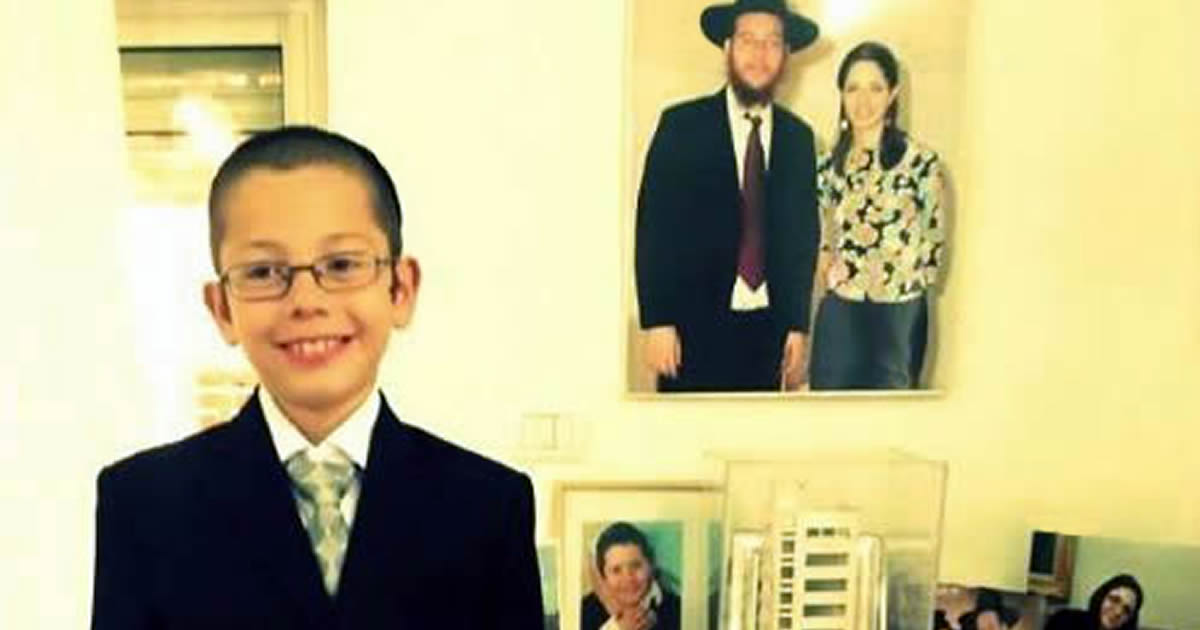 No one can forget the tragic terror attack in the Mumbai Chabad House in November 2008 that resulted in the murders of the shluchim, Rabbi Gabi and Rivky Holtzberg HY”D along with a number of other Yidden and more locals and security personnel. The only survivor of the Holtzberg family was little Moishe, who was two at the time, and his faithful caretaker Sandra, who is credited with saving his life.

Today, the family recalls the tragedy on the yahrzeit while marking Moishe’s tenth birthday B”H.

Moishe was taken in by his grandparents, Rav Shimon and Rebitzen Yehudis Rosenberg and with the assistance of government agencies, Moishe’s Indian caretaker, Sandra, was given permission to remain in Israel at his side and she was willing to make the sacrifice to assist raising him, leaving her own family behind.

For Moishe, the birthday includes visiting the kevarim of his parents next week to mark the eighth yahrzeit. Mrs. Rosenberg told Yediot Achronot that their oldest grandson is 20 and for them, Moishe has become another son, not a grandson. She explains raising him is another shlichus from HKBH, to direct him in the derech of his parents who were Chabad shluchim.

Mrs. Rosenberg admits there are some very difficult times, adding that on the last yahrzeit, while reciting Tehillim at Har HaZeisim, he ran and she had to chase after him. “I found him standing by the fence and his body language was clear. He simply wanted to run away from his painful reality. I called him and he came with me to say Kaddish. This week, as we prepared for another yahrzeit, Moishe asked to daven [shachris] at the 5:30 minyan instead of his regular 7:00AM minyan explaining ‘too many people and too many eyes. I do not want to say Kaddish there’. Last year we flew Moishe to NYC for the Kenos Shluchim. He was invited officially as a representative of Mumbai. He was apprehensive but at the end, got on the stage and read Tehillim in memory of his parents in front of 5,000 people without fear or embarrassment. How did this miracle occur? Love and boundless love and the koach shown to him by the chassidim”.

Moishe gives tzedaka daily in memory of his parents, morning and evening. When his grandfather covers him and wishes him a good night, they look at the photo of his parents which hangs over his bed and together they say “good night abba, good night ima”.

Moishe was in 5th grade in a talmud torah in Migdal HaEmek. Twelve years ago, Mrs. Yehudis Rosenberg, 64, retired from teaching after 33 years and established the Chasdei Malka Chaya organization in memory of her mother, working with volunteers to distribute food to 70 needy families. They also run a gemach for women, offering clothing for a simcha. Rabbi Rosenberg, 67, continues giving shiurim and spends most of his time with Beit Gabi & Rivki HY”D – a house of maasim tovim. The structure was recently completed after three years and according to Rav Rosenberg “It is a house that shines love to northern area residents, invites soldiers, children and others. There is a memorial room for his children as well.

Moishe also speaks fluent English, for this is the language he uses to communicate with Sandra. He also appears to be very good in math and his grandparents feel he is above average intelligence.

For his birthday, Moishe has asked for Jewish comics which contain stories of rabbonim and a CD of Avraham Fried. Moishe also knows how to count from one to ten in Hindi and remembers a few songs as well from his childhood. Sandra explains Moishe is constantly correcting her Hebrew and they both laugh.

She adds “He has three globes and dreams of traveling in Australia, South Africa and Brazil. His grandparents have different plans for him. They hope to escort him to his chupah at the age of 22 in line with the Chabad minhag and Rav Rosenberg hopes he will become a Chabad Shaliach, preferably in Israel”.