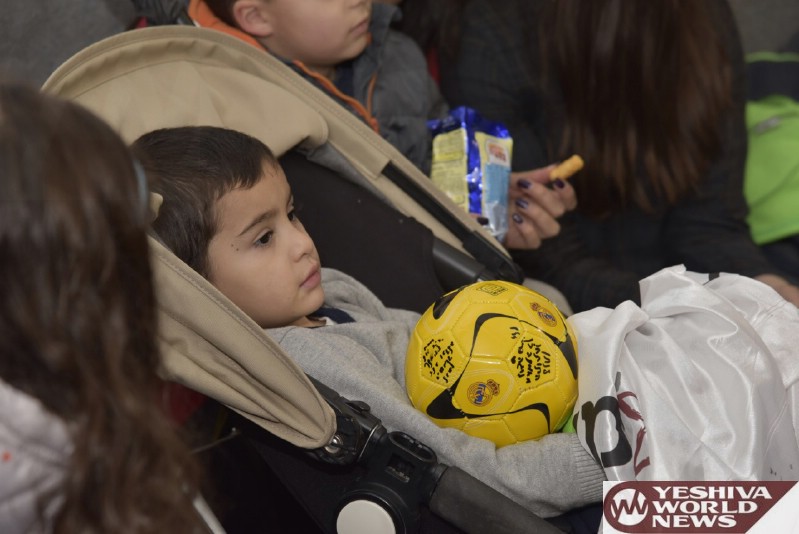 In an exciting ceremony that took place on Thursday, 7 Teves in Jerusalem, Natan Bennett, a 3 years-old terror attack survivor, joined a terror victims’ soccer team. Natan has been wounded in his leg by Palestinian terrorist in October 2015 in Jerusalem, in one of the first and deadliest terror attacks of last year’s wave of terror. His father, Aharon HY”D, was killed and his mother, Adele, was severely wounded in the attack. Rabbi Nechemia Lavi HY”D was also stabbed to death at the attack when he came to the aid of the Bennett family.

Doctors of Hadassah Medical Center have struggled to save Natan’s leg and now he is recovering after a number of surgeries.

During a ceremony, held before the match, the team, that was established by the OneFamily organization, has “adopted” Natan and he joined the squad receiving a shirt with the number 10 on it. Natan has also received presents from the team players. Natan’s mother’ Adele, also attended the match.

The OneFamily soccer team was launched 6 years ago and is formed from brothers and sons of terror victims as well as terror attacks survivors. The soccer team serves as a powerful therapeutic support group for its members. Players work together as a team on and off the field, forming bonds of friendship and support. OneFamily is a leading Israeli NPO founded to support terror victims and their families.

“Our goal is not only to win,” coach Ami Ben-David said. “Every single player of your team is a family member. Today we were joined be a new player – Natan Bennett. From now on, he has a huge supporting family.”

Chantal Belzberg, OneFamily’s CEO: “Relationship between team members is amazing. Players become close friends and they support each other. While on the field we see a football game, there is something much deeper going on. We know that Natan is a football fan. Therefore we thought it would be a good idea for the team to “adopt” him.”

On October 3, 2015, a knife-wielding Arab attacked Aharon Bennett, his wife Adele, their 2-year-old son (Natan) and baby daughter who were on their way to daven at the Kosel. http://www.theyeshivaworld.com/news/headlines-breaking-stories/370152/high-court-intervenes-to-prevent-razing-home-of-the-terrorist-who-murdered-aharon-bennett-and-rav-nechemia-lavie-hyd.html Rabbi Nechemia Lavi, an Old City resident and IDF reserve officer, went down with his gun to try and save them, but the terrorist stabbed him and seized his weapon. Nechemia Lavi and Aharon Bennett, who were stabbed in the upper body and were unconscious when paramedics arrived at the scene, died in hospital shortly afterwards. Bennett’s wife Adele was seriously wounded.

Last week, Abdel Aziz Mrai, who had bought the knife used by the terrorist, was sentenced to 35 years in prison. The terrorist himself was killed at the scene by the police.