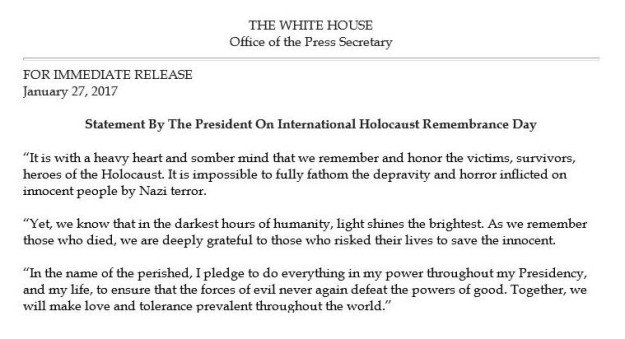 White House chief of staff Reince Priebus says there are no regrets a presidential statement on the Holocaust didn’t include a clear reference to the 6 million Jews who were killed.

He says he doesn’t regret the words and that “we’ll never forget the Jewish people who suffered in World War II.”

Trump’s three-paragraph statement Friday on International Holocaust Remembrance Day drew criticism from the Anti-Defamation League after it failed to make any reference to Jews, in contrast with presidents from previous administrations.

Priebus tells NBC’s “Meet the Press” he’s “not whitewashing anything” and that for the record, “Everyone’s heart is impacted here by that terrible time.”