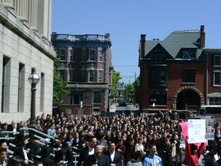 Thursday May 13th was an historic day in the battle for School Choice in New Jersey. Over 1,500 people, including more than 800 Yeshiva girls and residents from Lakewood, gathered at the State House for a rally on behalf of S-1872 otherwise known as the Opportunity Scholarship Act.

The passage of the OSA will provide Corporate Tax Scholarships for qualifying students who reside in a School District with a Failing School. The purpose of this bill is to allow parents to have a choice in which school their child should best educated.

Amongst the School Districts with failing schools, three of them – Lakewood, Passaic and Elizabeth have large Orthodox Jewish communities. This bill will also help parents in our community keep their children in Yeshiva. Twenty-five percent of the scholarship funds are intended to keep children already in Non-Public Schools – in their schools.

What was historic was that the rally never materialized. The choice of yesterday’s date was to coincide with an Economic Growth Committee hearing to debate the bill. The NJEA (Teachers Union who oppose the OSA) members filled up most of the seats in the room. When the Chairman of the Committee, Senator Ray Lesniak (also the Co-Prime Sponsor of the OSA together with Senator Tom Kean) asked that they give up some of their seats for people in favor of the bill they refused. He gave them a choice of either vacating half of their seats or moving the hearing outside where the rally was taking place, the NJEA members still refused to do so. So the Senator made good on his word and moved the hearing outside.

While that squashed the rally, it gave all of those present an opportunity to see how the Legislature works.

When Assemblyman Gary Schaer from Passaic happened to walk by the scene, he said today marked the first time he had seen two things in Trenton.

The first was a Committee Hearing outside on the steps of the State House, and the second was a Mechitza for the women and girls from Lakewood who attended the rally.

Addressing the hearing/rally on behalf of our community were the following: Josh Pruzansky of Agudath Israel of New Jersey, Rabbi Shlomo Katz representing the Igud HaMosdos, and Howie Beigelman of the Orthodox Union.

From the standpoint of our community it was a true Kiddush Hashem to watch our children behave so nicely in that setting. Much gratitude for this showing is due to the Igud HaMosdos of Lakewood who worked in partnership with Agudath Israel of New Jersey in organizing the Yeshivos to participate in this rally.

The Bill passed by a 6-0 vote and now heads to the Senate Budget Committee.