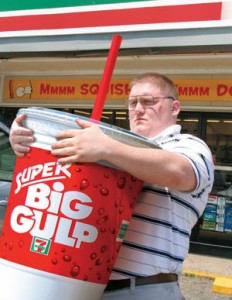 Gov. David A. Paterson is considering a new strategy in his effort to pass a soda tax, hoping to win over reluctant lawmakers and the beverage industry by pairing the proposal with a state sales tax exemption on diet sodas and bottled water.

When put into full effect, the original penny-per-ounce tax on sugary sodas was supposed to garner $1 billion a year, an important sum for a state anxiously trying to close a multibillion-dollar shortfall. But since the Senate and Assembly have been firmly opposed to a soda tax, administration officials seem willing to settle for the $815 million a year they estimate the new proposal, with its exemption for diet drinks, would bring in.

The hope, Paterson administration officials said, is that combining the carrot of sales tax exemptions and the stick of sugary soda taxes may get the beverage companies to relax their opposition — and that Assembly members and senators might follow along. They also argue that the impact the new proposal could have on the epidemic of adult and childhood obesity and diabetes should be another incentive.

“They should embrace this idea,” said a Paterson administration official, who spoke on the condition of anonymity because the plan was not yet in final form. “They’re interested in selling product, and this proposal would increase the sale of more diet products. Product is product.”

Representatives of the beverage industry said they wanted to know more about the plan, but they were not quick to embrace the concept. They have argued that people who like sugared sodas will not easily switch to those with artificial sweeteners.

“Critics make the presumption that people switch, but people have their preferences, which is why companies are constantly trying different innovations on products like Coke Zero and Pepsi Max,” Kevin Keane, a spokesman for the American Beverage Association, said Wednesday.

Only Arkansas and West Virginia have passed excise taxes specifically on soda, Mr. Keane said, and cities like Baltimore and Washington are considering taxes on sugary sodas.

Under the proposal the Paterson administration is considering, consumers would end up paying an additional penny per ounce on sugared sodas and drinks. In actuality, that sugar tax would be levied not at the cash register but on the beverage bottler, though presumably it would be passed on to consumers. But if consumers bought diet sodas or bottled water, they would avoid that tax and the sales tax as well. The state would reimburse localities for their portion of the lost taxes.

Mayor Michael R. Bloomberg of New York, health care unions and professionals and advocates for better health like the Alliance for a Healthier New York generally support the tax on sugared drinks. State budget analysts estimate that obesity-related ailments like diabetes cost the state $7.6 billion a year. “It’s a win-win for New York,” said Eric Koch, a spokesman for the alliance.

“It’s a proven way to help reduce obesity and encourage people to lead healthier lives,” he said, in addition to raising hundreds of millions of dollars for state health care.

The money raised, Mr. Koch said, would save thousands of health care jobs.

But Nelson A. Eusebio, executive director of the National Supermarket Association, which represents 450 independent supermarkets in New York, New Jersey and Connecticut, said he was opposed to a tax on sodas because customers would have less money to spend on other products in their stores.

“We don’t have a problem with the state balancing its books, but why are you taking it out of the industry that provides thousands of jobs for your state?” Mr. Eusebio said. “The people affected most are urban minority dwellers. They have less money to spend on a product than someone who is more affluent. To fight obesity, let’s educate people. Taxation doesn’t equal good health.”