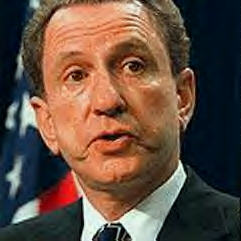 Specter, a longtime Republican, switched parties in April of 2009 to avoid a potential defeat against his likely GOP opponent Pat Toomey. But Sestak, a virtual unknown compared to his incumbent opponent, successfully exploited the anti-Washington mood and campaigned around Specter’s decision to switchfrom the Republican to the Democratic Party last year.

Specter took the stage shortly after it became clear he was going to lose the race and thanked his family, staff and supporters, including President Obama and Vice President Biden.

Specter also tweeted a congratulatory message to his rival.

“Congratulations, Congressman Sestak. You have my support for the general election,” Specter wrote.

A jubilant Sestak praised Specter and thanked him for his service, but had some pointing words about incumbents.

“Too many career politicians are a bit too concerned about keeping their jobs rather than serving the public, helping the people,” Sestak said in a speech reflective of his campaign against Specter.

A spokesman for the Pennsylvania Department of State told ABC News earlier today that turnout was “relatively light” versus comparable past elections, especially in Philadelphia, where Specter’s main supporter base was concentrated.

Specter served as one of two senators from Pennsylvania for nearly 30 years. He was first elected to the seat in 1980, and through the years survived many tight races and challenges, including against Toomey in 2004.

But what jolted Sestak’s visibility in this primary was a television ad showing Specter with President George W. Bush and Sarah Palin. Sestak also played upon Specter’s party switch, painting him as a politician who made the move for his own political gain and to save his job rather than for his constituents.

Specter was backed by the White House — although neither Obama nor Biden campaigned with him in recent days — as well as other heavy hitters in the state like Gov. Ed Rendell. Those supporters who now have to switch their allegiance to Sestak cautiously congratulated both candidates while quickly aligning themselves behind the new Democratic candidate for the seat.

“Congressman Sestak and Senator Specter both campaigned tirelessly across the Keystone State in support of President Obama’s efforts to help middle-class Americans. I congratulate them both on a hard-fought campaign,” Democratic National Committee chairman Tim Kaine said in a statement.

On the Republican front, former Congressman Toomey secured the GOP nomination, as expected, and will face Sestak in the midterm election.