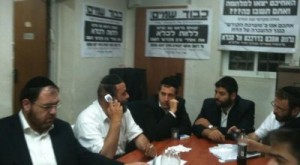 Final preparations are underway in both Yerushalayim and Bnei Brak and police and chareidim are preparing for the prison march to escort the Emanuel Beis Yaakov parents to prison. Gedolei Yisrael will be among the participants in both cities.

The Yisrael HaYom daily calls the upcoming event “The mother of all protests”, realizing the magnitude of what will be taking place on Thursday afternoon.

In Yerushalayim, the event will get underway at 2:00pm, with the parents standing on the Bar Ilan Bridge in shabbos clothing, wearing handcuffs, and ribbons that say “Prisoner L’Shem Shomayim”.

The event will begin with tehillim and then divrei chizuk from rabbonim and representatives from Emanuel. They tzibur will then escort the parents to the Russian Compound detention center via Yirmiyahu, Bar Ilan, Shmuel HaNavi and Shivtei Yisrael Streets. Women will gather only on Minchas Yitzchak Street.

In Bnei Brak, the event will begin at 1:00pm, at Chazon Ish Street, corner of Nechemia Street. Maran Shevet Halevy HaGaon HaRav Wosner Shlita will recite tehillim, words from an Emanuel parent’s representative and kabolas Ohl Malchus Shomayim. They will then head down Ezra Street, to Nechemia and Ben-Yaakov to the exit of the city and then to join the Jerusalem atzeres. Rabbonim Shlita in Bnei Brak have instructed women to remain at home and recite tehillim.

Participants are urged to bring water. There will be stations for water and first aid in both cities but organizers remind the tzibur today, Thursday, is expected to be a very hot day. Persons who have a shofar are urged to bring it as well.

According to organizers in the Agudas Yisrael office, “hundreds of thousands of members of the chareidi tzibur are expected to take part in the marches”.

During the course of the day, MKs Meir Porush, Moshe Gafne, Uri Maklev and Eliezer Moses will be stopping in at the homes of Maran Posek HaDor HaRav Elyashiv Shlita and the Slonimer Rebbe Shlita for instructions as events unfold, the daily HaMevaser reports. Chareidi MKs are also in contact with members of the Council of Torah Sages of Agudah for continuous instructions and to keep the Rabbonim Shlita apprised of events.

Rav Elyashiv has authorized sending a message to all mosdos, that all talmidim and avreichim are to take part, stating the event is not bitul Torah.

Following a meeting on Wednesday of Eida Chareidis askanim, the decision was made that the Eida will also take part in the event. Gavaad HaGaon HaRav Weiss Shlita is also expected to personally attend.

The Council of Torah Sages of Shas is also planning to convene on Thursday morning, presumably to decide how to react to the major event in the Ashkenazi chareidi community.