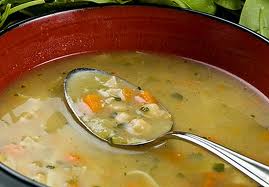 Mayor Bloomberg’s latest health campaign — cutting salt intake — has targeted soup as one of the big sodium offenders to be taken down with new city ads.

The ads, which will be plastered on subways for the next two months, feature a half-opened can of soup with a geyser of salt spewing from the top and forming a heap around the can.

Trying to put fear into the hearts of salt-aholics, the ads will warn that excessive sodium “can lead to heart attack and stroke” and list average amounts of salt in various foods, such as salad dressing and frozen pizza.

An admitted fan of dumping salt on his own food, Bloomberg said the biggest culprits behind high-salt diets are the food processors that include copious amounts of sodium in canned soup and other prepared foods.

The posters irked soup giant Campbell’s, which said they are “not an accurate representation of the company’s soup portfolio,” spokeswoman Juli Mandel Sloves said.

“Campbell is an acknowledged leader in sodium reduction. We have been reducing sodium across our portfolio for decades,” Sloves added.

The campaign costs $370,000 — $130,000 of which comes from city taxpayers. The rest is covered by the federal government, a city Department of Health spokeswoman said.

Help Us Fulfill a Dream for the Special Needs Community