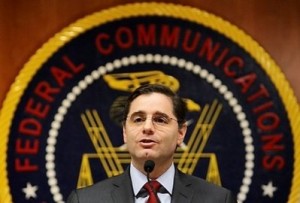 The rules are expected to bar providers from discriminating against legal Internet traffic and require more transparency. They also would let broadband providers for the first time charge more to companies that want faster service for delivery of games, videos or other services.

Net neutrality has become a contentious issue as worries grow that large phone and cable companies are growing too powerful as Internet gatekeepers. Start-ups and small businesses that rely on the Internet to provide shopping, information or other services to consumers are particularly concerned.

The FCC has wanted to step in and act as an Internet traffic cop, but Congress has never given it clear authority to do so.

“We must take action to protect consumers against price hikes and closed access to the Internet—and our proposed framework is designed to do just that: to guard against these risks while recognizing the legitimate needs and interests of broadband providers,” FCC Chairman Julius Genachowski said in a blog post this month.

The proposal has split the five-member FCC board. The two Republican members say the proposed rules impose an unneeded burden and will discourage broadband investment.

The proposed rules are expected to provide some new protections for consumers, such as a guarantee that they can access legal websites, and require providers to give more data on Internet speeds and service.

The rules include fewer restrictions on wireless broadband networks.

Phone and cable companies have offered some praise, as have some venture capitalists, including John Doerr, who called it “pragmatic balance of innovation, economic growth and crucial investment in the Internet.”

For the most part, phone and cable companies have said they didn’t want new rules on Internet lines. But they have mostly backed AT&T Inc.’s push to compromise with Mr. Genachowski.

Liberal activists and some consumer advocates have sharply criticized the proposal, saying it allows too much leeway to big broadband providers and falls well short of promises made by President Barack Obama, including limits on how the rules apply to mobile broadband networks.
“The chairman seems more willing to work with the companies he’s supposed to be regulating than his fellow commissioners at the FCC,” said Joel Kelsey, political advisor for Free Press, a public advocacy group.

Sen. Al Franken (D., Minn.) wrote on a blog Monday that “grassroots supporters of net neutrality are beginning to wonder if we’ve been had” and that the proposal was “worse than nothing.”

The rules are also expected to be challenged in court. Similar rules proposed by the agency in 2005 were thrown out by a federal appeals court in April.

In April, a federal appeals court tossed the FCC’s first effort to enforce net neutrality rules, saying the agency hadn’t justified its authority to act. The current proposal is expected to use a similar argument to the one used in the April case.

In May, the FCC’s general counsel said using a variation on the same argument was “a recipe for prolonged uncertainty” but FCC lawyers now say upon further consideration, they believe their plan will withstand challenge.