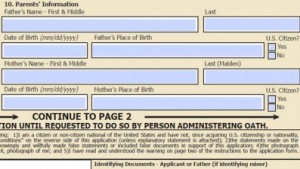 The words “mother” and “father” will be removed from U.S. passport applications and replaced with gender neutral terminology, the State Department says.

“The words in the old form were ‘mother’ and ‘father,’” said Brenda Sprague, deputy assistant Secretary of State for Passport Services. “They are now ‘parent one’ and ‘parent two.’”

A statement on the State Department website noted: “These improvements are being made to provide a gender neutral description of a child’s parents and in recognition of different types of families.” The statement didn’t note if it was for child applications only.

The State Department said the new passport applications, not yet available to the public, will be available online soon.

Sprague said the decision to remove the traditional parenting names was not an act of political correctness.

“We find that with changes in medical science and reproductive technology that we are confronting situations now that we would not have anticipated 10 or 15 years ago,” she said.

Toeiva rights groups are applauding the decision, but some conservative Christians are outraged over the decision.

“Only in the topsy-turvy world of left-wing political correctness could it be considered an ‘improvement’ for a birth-related document to provide less information about the circumstances of that birth,” Family Research Council president Tony Perkins wrote in a statement to Fox News Radio. “This is clearly designed to advance the causes of same-gender ‘marriage’ and Toeiva parenting without statutory authority, and violates the spirit if not the letter of the Defense of Marriage Act.”

The new gender-neutral passport application will be rolled out in February.