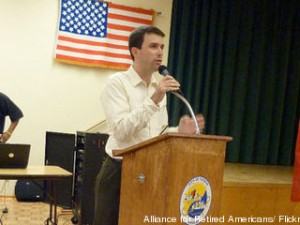 Zimmerman was among 24 employees currently employed by the congresswoman, according to House salary disclosure information posted on Legistorm.com. The site listed Zimmerman as deputy scheduler as of the end of September.

Giffords was conducting a routine congressional event called “Congress on your Corner” during the time of the shooting, an event that Zimmerman helped organize.

Giffords Spokesman C.J. Karamargin  said that the Congresswoman had not received any recent threats and had no reason to fear for her or her staff’s safety.

“She has always been very open and accessible. She’s never shied away from an opportunity to meet with her constituents, even when the topic was hot and heavy,” Karamargin told CNN Saturday night.

“Our community has lost beloved friends and colleagues,” wrote Gifford’s chief of staff Pia Carusone in a statement. “Our hearts and prayers go out to all of them and to those who are suffering the loss of treasured friends and family members.”