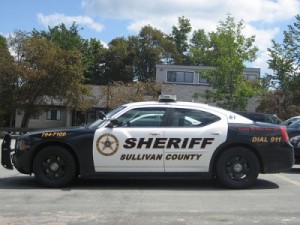 On Friday January 7, 2011 at approximately 4:45 PM, an off duty Deputy Sheriff on his way home from work at the Sullivan County Jail spotted a suspicious subject in the vicinity of the Hollywood Country Club Bungalows located at 215 Cold Spring Road in Monticello. The Deputy called for back up when he saw the suspect duck behind one of the buildings.

Deputies from the Sheriff’s Office responded, including a Sheriff’s K-9, and located Chistopher J. Victor, 43, of Sackett Lake.

Christopher Victor had in his possession a pipe cutter, with a stack of copper pipes located nearby. The investigation at the scene revealed that the suspect had accessed the crawl space under three of the bungalows and cut out the pipes.

The Sheriff’s Office and other police agencies have investigated numerous thefts of metal over the past few years according the Sheriff Mike Schiff. World wide demand for metal has pushed up the price considerably, with local scrap yards currently paying $3.00 per pound for copper.