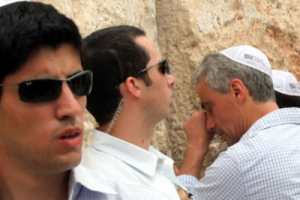 He’s been practicing his inaugural address before his harshest critic — his 14-year-old son — and getting some pointers about content and delivery.

No matter what black-tie dinners are going on in Chicago on Friday nights, he plans to skip them to be home to help prepare and enjoy Sabbath dinner with his family.

He also plans to have breakfast with his kids, take them to school at least twice a week and spend at least one weekend day with his family.

Rahm Emanuel is preparing for the moment of a lifetime — his swearing-in today as Chicago’s 46th mayor and the city’s first Jewish mayor.

He’s still, as he put it, “pinching myself that this is happening.” He’s not scared — just a little awed by the sense of “responsibility” he feels.

On the eve of his historic swearing-in, Emanuel, 51, sat down with the Chicago Sun-Times to talk about his family, his image and the vexing issues he inherits from Mayor Daley.

The following are a few of the questions asked in the interview:

WHAT’S THE SENSE OF EXCITEMENT IN YOUR HOUSEHOLD?

“Amy and the kids are clearly excited. This is a big month. Ilana is also gonna be Bat Mitzvahed. I was just telling Amy I’m so excited for her because she seems to be handling both her Bat Mitzvah as well as her school with a level of poise sometimes her father doesn’t show. Zach has given me comments about the speech that only a teenager can give their father, since something their father does is never good. Leah came in over Passover to be with me. So, there’s an energy and excitement. They know how much I put into this, but also they put a lot because I miss them. Being separated. There was a sacrifice — not only by me, but by them not having their father around.”

WHAT ABOUT YOUR PARENTS?

“Given sometimes there were challenging periods growing up, they’re a little surprised. And also, this is the city that my mother’s father in 1917 fleeing the pogroms in Eastern Europe coming to not just America, but America’s city: Chicago. He came as a 13-year-old by himself to meet a third-cousin who he had never known. It was a typical immigrant story. My father immigrated to Chicago in 1959. My brothers knowing that this has been in all of my dreams of public service . . . to be the mayor of the city we grew up in.”

ALD. ED BURKE (14TH) WAS ONCE QUOTED AS SAYING CHICAGO WOULD NEVER ELECT A JEWISH MAYOR, YET HERE WE ARE.

“The Jewish community is what, 7 percent maybe of the city vote? There’s a personal pride. But, I’m also very proud of the people of Chicago because people of different ethnic and religious backgrounds — clearly they didn’t vote for me to be the first Jewish mayor. They voted for me to be a mayor who’s effective in getting them the change they wanted. For me individually — for my parents individually — that’s a milestone. But it’s not the way I look at the job and the challenges.”

MAYOR DALEY CARVED OUT SUNDAYS FOR BALANCE. WHAT WILL YOU DO TO KEEP BALANCE IN YOUR LIFE FOR YOUR FAMILY?

“I set up the boundaries. I’m taking my children to school [at least twice-a-week]. I work out near the home so I can come home to have breakfast with them and then take them to school. I will be done Friday so I can be home for Sabbath dinner and to help prepare. So, Fridays you can have whatever black-tie events you have in the city, it doesn’t matter to me. Our Sabbath dinner is our Sabbath dinner. . . . And we’ll pick [a family day on weekends] based on kids’ or family activities. Sometimes, it’ll be Saturday. Sometimes, it’ll be Sunday.”