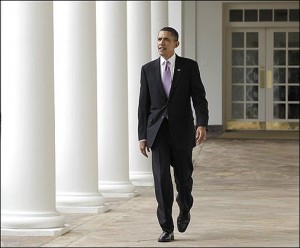 Americans are growing more dissatisfied with President Barack Obama’s handling of the economy and say it will be hard to vote to re-elect him without seeing significant progress over the next year and a half.

By a margin of 61 percent to 37 percent, a Bloomberg National Poll conducted June 17-20 shows Americans say they believe that Obama will have had his chance to make the economy “substantially better” by the end of 2012.

“As far as the economy goes, I don’t see that he has delivered on the change that he promised,” said Sharon Ortiz, a 38-year-old independent voter from Hampton, Virginia, who supported Obama in 2008. “The jobs that he promised — I haven’t seen it.”

At the same time, Americans are skeptical that Republican control of the White House and Congress will be a better prescription for their economic wellbeing. Sixty percent said that any Republican candidate will need to move so far to the right on fiscal and social issues to win their party’s nomination that it will be very hard to back the nominee.