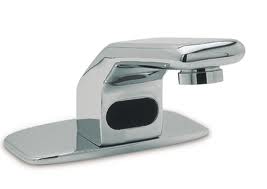 Washing your hands in an automatic faucet seems so much cleaner than have to touch a handle on the old-fashioned model. But guess again.

A study revealed that automatic faucets are more likely to harbor nasty bacteria than manual ones.

Electronic faucets may conserve water, “but decreased water flow may increase the chance that bacteria grows, because you’re not flushing them through,” theorized Dr. Emily Snydor, who led the team of researchers, told MSNBC.

Snydor and her team tested electronic and manual faucets in patient care areas of The Johns Hopkins Hospital over a seven-week period from December 2008 to January 2009. They found Legionella – a bacteria that causes Legionnaires’ disease, a severe from of pneumonia – growing in half of cultured water samples from the 20 electronic faucets they tested. Only 15 cultured water samples from manual faucets, however, had the bacteria.

As a result, all 20 of the electronic faucets were removed from the hospital and replaced with manual ones. A hundred more will be replaced throughout the hospital.

Just don’t forget to turn the faucet off when you’re done.