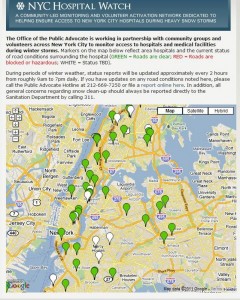 NYC Public Advocate de Blasio today announced an online and volunteer initiative to engage New Yorkers in monitoring snow removal, in particular on streets near 55 local hospitals.  New Yorkers can report conditions in their neighborhood and at nearby hospitals by calling the Public Advocate Hotline at 212-669-7250, at advocate.nyc.gov , or via twitter @BilldeBlasio. At least 10 New York City hospitals had facilities, including emergency rooms, which were snowbound for days following December’s blizzard.

“Our City works best when New Yorkers are engaged, especially when we face challenges. My office is working with community groups and New Yorkers in all five boroughs to keep watch and make sure our hospitals are clear and accessible,” said Public Advocate Bill de Blasio.

The Public Advocate is partnering with 22 community groups which will report conditions in neighborhoods and near hospitals several times per day following major snow events and other emergencies. The Office of the Public Advocate will update an online map in real time as information is reported.