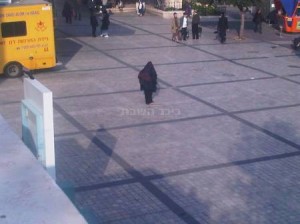 A women dressed in the latest burka fashion sparked a terrorist alert in downtown Yerushalayim today, 25 Cheshvan. The incident occurred on King George Street, as security guards spotted the person in the hooded garb and feared the worst, while passersbys distanced themselves from the presumed female, fearing a suicide bomber, in downtown Jerusalem. Alarmed citizens summoned police.

A team of motorcycle commandos arrived, but the suspected terrorist had already walked into an alley, but police followed and ordered the person to remove her head piece. The Gideon commandos learned it was a journalist working undercover, literally, seeking to examine the response of the general public to the new fashion statement appearing in a small sector of the chareidi community.

Needless to say the journalist did not hesitate to comply with orders of the commandos who had weapons drawn and appeared to be in no mode for hesitation or non-compliance. Baruch Hashem for their superior training, which permitted them to act as they did without opening fire and chas v’sholom wounding or killing an innocent person as persons in the area were panicking.

It can be assumed that the incident will spark an outcry of concern regarding those women who today dress this way regularly and the concerns of police and other security agencies.