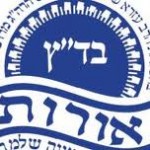 The dati leumi community has decided to launch its own hashgacha, a hechsher that intends to compete with the top-of-the-line chareidi hechsher, Badatz Eida Chareidis.

Orot HaKashrut will be under the guidance of Rabbi Shmuel Eliyahu Shlita, the chief Sephardi rabbi of Tzfat and a son of the late chief rabbi, HaGaon HaRav Mordechai Eliyahu ZT”L. Rabbi Eliyahu has appointed Rabbi Ezra Sheinberg to oversee the day-to-day operations of the new badatz.

The new hashgacha is expected to begin appearing in the marketplace in the coming weeks. The hechsher will also have its own poultry shechitah. According to the director of the new kosher certifying service, Ronen Gimni, who told Galei Yisrael Radio the birthing process is difficult since there is much opposition, apparently from the Chief Rabbinate of Israel too. Gimni however remains optimistic, explaining “HaKadosh Baruch Hu will open the gates and the community will come forward”.

With the realization that a growing number of people in the dati leumi world are displeased with the kashrus of the Chief Rabbinate, Orot officials are confident this will provide a welcome alternative to the Eida Chareidit and other chareidi-affiliated high-end hechsherim.