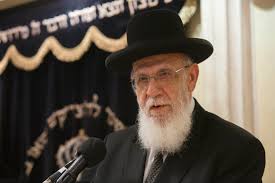 The head of the Shas Moetzas Gedolei Hatorah, HaGaon HaRav Shalom Cohen Shlita, has echoed the words of Gedolei Hador in Bnei Brak, instructing Shas party officials to wage an all-out war against the recent High Court of Justice ruling to permit the opening of supermarkets in Tel Aviv on Shabbos R”L.

YWN-ISRAEL reported Gedolei Hador in Bnei Brak and HaGaon HaRav Bentzion Mutzafi Shlita have condemned the ruling, with HaGaon HaRav Aharon Yehuda Leib Shteinman Shlita quoted telling Degel Hatorah MKs if they cannot reverse the decree, there is no longer and place for them in the coalition government.

Speaking during a Tel Aviv Kenos on Monday night the eve of 29 Nissan, Rav Cohen spoke out in the strongest of terms against the High Court ruling. Rav Cohen reportedly told Shas leader Minister Aryeh Deri that if the ruling cannot be reversed by introducing legislation, then Shas too may not remain a member of the coalition government.