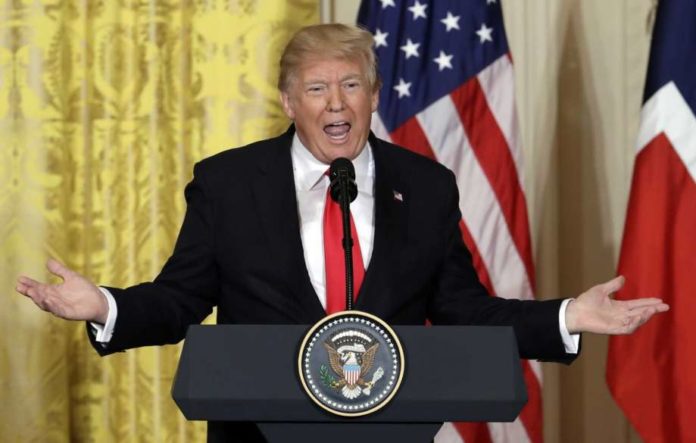 The Trump administration on Tuesday cut tens of millions of dollars in money for Palestinian refugees, demanding that the U.N. agency responsible for the programs undertake a “fundamental re-examination,” the State Department said.

In a letter, the State Department notified the U.N. Relief and Works Agency that the U.S. is withholding $65 million of a planned $125 million funding installment. The letter also makes clear that additional U.S. donations will be contingent on major changes by UNRWA, which has been heavily criticized by Israel.

“We would like to see some reforms be made,” said State Department spokeswoman Heather Nauert, adding that changes are needed to the way the agency operates and is funded. “This is not aimed at punishing anyone.”

The State Department said it was releasing the rest of the installment — $60 million — to prevent the agency from running out of cash by the end of the month and closing down.

The U.S. is UNWRA’s largest donor, supplying nearly 30 percent of its budget. The agency focuses on providing health care, education and social services to Palestinians in the West Bank, Gaza Strip, Jordan, Syria and Lebanon.

“Given the long, trusted, and historic relationship between the United States and UNRWA, this reduced contribution threatens one of the most successful and innovative human development endeavors in the Middle-East,” UNRWA chief Pierre Krähenbühl said in a statement.

Hundreds of thousands of Palestinians either fled or were forced from their homes during the war that led to Israel’s establishment in 1948. Today, there are an estimated 5 million refugees and their descendants, mostly scattered across the region.

The Palestinian Liberation Organization reacted angrily to the move, saying it is targeting “the most vulnerable segment of the Palestinian people and depriving the refugees of the right to education, health, shelter and a dignified life.”

“It is also creating conditions that will generate further instability throughout the region and will demonstrate that it has no compunction in targeting the innocent,” the PLO leadership said in a statement.

U.N. Secretary-General Antonio Guterres said he was not aware of the decision, but warned that UNRWA provides “vital services.”

“I am very concerned and I strongly hope that in the end it will be possible for the United States to maintain the funding of UNRWA in which the U.S. has a very important share,” he told reporters at the U.N.

Israel’s ambassador to the U.N., Danny Danon, praised the move, arguing that UNRWA misuses humanitarian aid to support propaganda against the Jewish state and perpetuate the Palestinians’ plight.

“It is time for this absurdity to end and for humanitarian funds to be directed towards their intended purpose: the welfare of refugees,” Danon said in a statement.

The U.S. donated $355 million to UNWRA in 2016 and was set to make a similar contribution in this year, with the first installment to have been sent this month. But after a highly critical Jan. 2 tweet from Trump on aid to the Palestinians, the State Department opted to wait for a formal policy decision before sending its first installment.

Trump’s tweet expressed frustration over the lack of progress in his attempts to broker peace between Israel and the Palestinians, and he pointed the finger at the Palestinians. “We pay the Palestinians HUNDREDS OF MILLIONS OF DOLLARS a year and get no appreciation or respect,” he said. “But with the Palestinians no longer willing to talk peace, why should we make any of these massive future payments to them?”

Israelis accuse the U.N. agency of contributing to Palestinian terror activity and allowing its facilities to be used by terrorists. They also complain that some of UNRWA’s staff are biased against Israel.

Nauert said the United States believes there needs to be more “burden-sharing,” a regular Trump complaint about multilateral organizations dependent on significant contributions of U.S. cash.

“We don’t believe that taking care of other nations and other people have to be solely the United States’ responsibility,” she said.

The U.S. plan to withhold some, but not all, of the money was backed by Secretary of State Rex Tillerson and Defense Secretary James Mattis, who offered it as a compromise to demands for more drastic measures by U.N. Ambassador Nikki Haley, officials said.

Haley wanted a complete cutoff in U.S. money until the Palestinians resumed peace talks with Israel that have been frozen for years. But Tillerson, Mattis and others argued that ending all assistance would exacerbate instability in the Mideast, notably in Jordan, a host to hundreds of thousands of Palestinian refugees and a crucial U.S. strategic partner.

Eliminating or sharply reducing the U.S. contribution could hamstring the agency and severely curtail its work, putting great pressure on Jordan and Lebanon as well as the Palestinian Authority. Gaza would be particularly hard hit. Some officials, including Israelis, warn that it might push people closer to the militant Hamas movement, which controls Gaza.