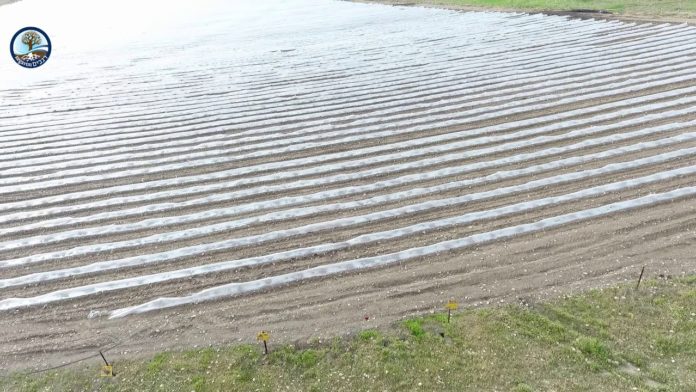 A number of months ago, officials of the Regavim organization turned to Defense Minister Avigdor Lieberman and Civil Administration Chief Brigadier-General Ben-Chur, warning of the ongoing alarming trend in which Palestinian farmers are working in minefields in the Jordan Valley area, often cutting through minefields with equipment to save time. It is reported they often see combines cutting through minefields, calling the situation “A disaster waiting to happen”.

In the past few weeks, a cow belonging to an Arab farmer was killed after a mine exploded. The pictures that Palestinians posted on Facebook after the incident make it clear beyond any doubt that this is a living and dangerous minefield, which could lead to a severe result in the event that a person steps on a landmine on the ground.

A recent follow-up by Regavim shows that, as time passed, the agricultural work inside the area continued intensively, and recently greenhouses were also established in the heart of the mined area.

The Ministry of Defense’s Mine Clearance Authority has been working in recent years to remove landmines from minefields that remain throughout the country and is expected to begin operations in the Jordan Valley area from the end of 2018 to the end of 2020. This fact raises the possibility that the agricultural activity taking place in the area, to allow in the future an Arab claim for possession of land on the basis of the existing Land Law in Judea and Samaria.

“The intensive incursion of Palestinians into the minefields in the Jordan Valley is dangerous behavior that must be dealt with severely,” says Yishai Chamo, the coordinator of the Regavim movement in Yehuda and Shomron. It is clear that in a disaster, the accusatory finger will be directed at the State of Israel, and therefore the Ministry of Defense must increase the enforcement activity against them before a real disaster comes.”