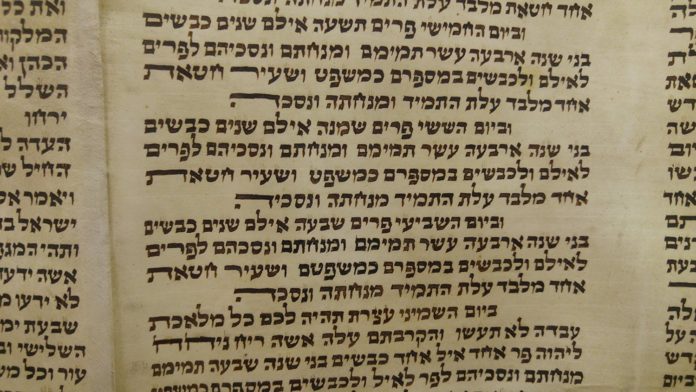 A few days before the celebration of Matan Torah, in the Israel Police, they connected סייפא לספרא while thousands of police officers are on the streets around the nation to protect citizens and maintain law and order.

The ceremony was attended by representatives of the bereaved families, Police Chief Roni Alshich and Chief Rabbi of the Israel Police Rabbi Rami Barchaiyahu (ברכיהו).

The Sefer Torah begins with a decision taken by the police to write a unique Sefer that will link police officers to bereaved members of the force. About two years ago, the project began under the banner “A Letter for Every Policeman” in which the parchment scrolls passed through all the police districts and at various stations and policemen wrote a letter to the memory of the fallen members of the force soldiers with the help of the Sofer STaM Yehoshua Wachsberger. As Shavuos approached, the chief and chief rabbi of the force added their letters to the Sefer Torah. The completed Sefer was placed in shul of the National Police Headquarters in Jerusalem in the presence of high-ranking officers.

In a speech delivered by Chief Alshich, he referred to the essence of the Torah and said that when they brought out Rabbi Chaninah ben Teradyon – one of the ten martyrs – and a Torah scroll in his lap, his daughter asked him: “Father, what do you see? And he answered: parchments burning and letters blowing in the air. The parchments of the Torah scroll can indeed be burned, G-d forbid, but its contents and essence remain with us and are not burned. This is how man is when his body is separated from this world, but his mark, values ​​and soul are eternal. From this it is quite clear why the commemoration by means of a Sefer Torah scroll is very common in Shuls.

Alshich explained this is why the choice was made to remember the department’s fallen martyrs with a Sefer Torah as well, a choice he feels was a natural one. “For generations, the existence of the Jewish people has been challenged by regional and global powers. Quite a few parchments have been burned. At times, entire communities, but the letters of the communities have not been burned. They have flourished in the air and have appeared and written again and again in the eternity of Israel. The world is again watching this miracle in which superpowers have disappeared into the “dust of history,” and the small eternal nation lives on, clinging to its eternity and survives.”

“And the challenge is not over. We returned to our country. We have an army and a defensive force, and we have a police force bearing the name of the Jewish people, but we are still required to preserve the body of the state and pay with the bodies of policemen and policewomen with endless devotion, who sacrifice the most precious – their lives.

The police chief, in his speech, reinforced the bereaved families’ representatives and said that the Israel Police faces a complex period, and we stand before these challenges as a strong, united and united force in the love of the land, with determination to continue their path, for the sake of our heritage. The future of our children.

“An unbreakable bond exists between us and you. It is a strong and warm relationship that gives us the strength, every day, whether as individuals or as an organization, to move on, to serve the citizens, to strengthen their personal security and to fortify the strength of Israeli society.”

Rav Barchaiyahu spoke of how the Sefer traveled to all stations around the nation and how members of the bereaved families wrote letters in the Sefer. He explained that while doing this, he was exposed to many stories of heroism and how police and border police give of themselves daily, and are out on the front line protecting citizens and the nation towards the existence of the nation.

The rav praised the commitment of the police commanders to assist in allowing as many policemen as possible to participate in the writing. “The introduction of this Sefer, which is one of the nine Sifrei Torah that will soon be introduced to the shuls in police stations, is very unique. This Sefer contains not only letters but also jugs of tears, tears of sorrow and pain over the loss of police officers and policemen, there are also tears of excitement from the police officers of the fallen and the families of the martyrs who wrote with a trembling hand the letter commemorating their loved ones. But it is a sign that a few days before Shavuos we in the Israel Police are privileged to bring this Sefer Torah to our Mishkan.