Former Defense Minister Moshe Ya’alon was a guest on One on One with Alan Dershowitz. He began by explaining before the revolution, Israel maintained good relations with Iran but today, this is not the case.

“We believe the deal reached with Iran is a ‘historic mistake’”, stated Ya’alon, who explained Israel believed the deal “Should be fixed at the very minimum”.

Dershowitz by and large agrees, stating Iran may never be permitted to achieve nuclear independence and this includes uninhibited nuclear inspections and therefore, the deal must be fixed and if so, then we need a new one. American sanctions alone are very powerful as everyone wants to deal with America and American banks, so even if the sanctions are America alone, they can be very powerful.

The dialogue then shifts to recent cross-border confrontations along the Gaza border with Israel. Former Deputy Foreign Minister Dannay Ayalon also explains, as do the others. 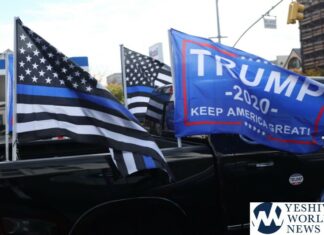 October 25, 2020 2:41 pm
39
The #JewsForTrump vehicle convoy was attacked multiple times around NYC on Sunday. The first reports of violence began on the Prospect Expressway in Brooklyn, when...