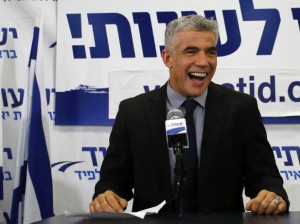 With Yahadut Hatorah signaling it can live with the share the burden solution presented by Vice Premier Moshe Ya’alon, Yesh Atid has responded negatively, explaining it will only accept its plan as explained to voters.

Ya’alon’s plan calls for a gradual increase in the chareidi draft, setting a goal of 6,000 in 2016. Ya’alon also rejects fines and imprisonment for draft evaders and remains opposed to setting a ceiling regarding the number of bnei Torah permitted to continue learning each year. Perhaps most pertinent is the fact the Ya’alon plan permits talmidim to learn until age 24, at which time they would have to enter the IDF.

Yesh Atid on the other hand gives a five-year hiatus period until the plan takes effect, but calls for the drafting of all chareidim who reach draft eligible age at that time. Yair Lapid’s plan permits a mere 400 talmidim to declare limud Torah as their full time profession annually, and he calls for fines and stern measures against draft dodgers.

Yesh Atid officials explained to Maariv that inducting chareidim at the age of 24 simply does not solve the problem since in the chareidi world, by that age, most are married with children so their military service would be minimal and costly.

Yesh Atid feels “you can’t have it both ways and one cannot address the share the burden issue while permitting a sector of the population to do as it wishes.”

Yesh Atid officials explain the Ya’alon plan is too expensive and it does not solve the problem so the only relevant solution in their eyes remains their plan.