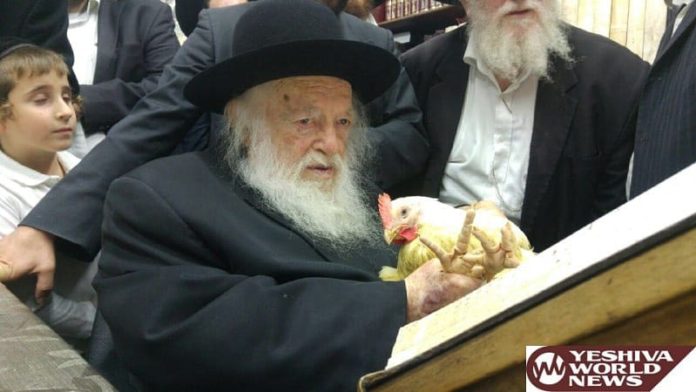 Speaking at a weekly shiur, Rosh Yeshivat Kisei Rachamim HaGaon HaRav Meir Mazuz Shlita spoke out regarding the minhag of Kaporos before Yom Kippur, stating that in the modern era it is preferable to give tzedaka instead of kaporos.

The rav continued to explain: “I used to use chickens, but it made a mess in the home and sometimes it died on the way. It was not simple. Hence, I did hataras nedarim and began with using money. Giving money is preferable anyway, since it is not dirty, and we eliminate the issue brought up by the Ben Ish Chai, that a chicken sees the other being slaughtered and becomes fearful and its lung collapses.”

He added, addressing the matter of cruelty to animals. “They take the chicken for the poor and the poor person says: They already brought me 100 chickens. Where will I put them all? I do not have a large freezer. If I keep them a bit here and there, then we can use it for Sukkos or Chanukah, during Cheshvan, Teves and Shevat and even have some remaining for Purim. This is simcha for the poor man? In addition, at times, the chicken is in a hot vehicle for hours and this is truly ‘tzar baalei chaim'”, he concluded.