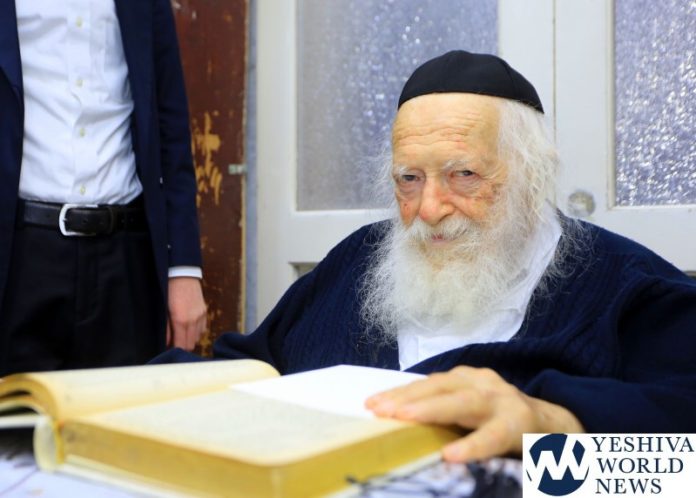 As is his annual tradition, HaGaon HaRav Chaim Kanievsky Shlita will be oleh la’regel on Sukkos. Today, Wednesday, the second day of Chol Hamoed Sukkos – but not during the morning hours as was once the Rav’s minhag, as a visit included a stop at the home of his father-in-law, HaGaon HaRav Yosef Sholom Elyashiv ZT”L, as part of ‘kabolas pnei rabbo b’regel’.

The Posek Hador also visits with two major supporters of mosdos Torah, Ruby Schron and Yossi Stern, both in the Rechavia neighborhood of the capital.

This year’s visit is timed to permit him take part in a Hachnosas Sefer Torah beginning at the home of Rav Druk at 27 Givat Shaul Street to the yeshiva, which is located at 16 Reinis Street. Because of the many persons who will be in attendance, entrance to Rav Druk’s home will be blocked off by security personnel, only permitting invited guests to enter.

The rav will take part in a dinner hosted by Ruby Schron on behalf of a son, Rav Shlomo Kanievsky, as the yeshiva has incurred a debt of close to NIS 30 million. The Rav is expected to daven maariv at the Kosel. If time remains and the Rav has the energy, he will visit Yeshivas Kaminetz for an event hosted by Philanthropist Shlomo Yehuda Rechnitz. At about 10:00PM the Rav is expected to return home.

A special vehicle will be at the Rav’s disposal for the day, one that meets his requirements for so many hours of travel.