With only a few short weeks remaining to mayoral elections throughout Israel, the Vishnitzer Rebbe Shlita is calling on followers to back the mayoral campaigns of Yossi Deutsch in Yerushalayim and Yisrael Porush in Elad. The rebbe’s message is particularly audible in the absence of a proclamation from the Moetzas Gedolei Torah of Agudas Yisrael.

Speaking at the Begleisin the Yomtov tisch on Simchas Torah, the rebbe said, “I don’t want to get into politics etc., but unfortunately, I am informed that efforts to reach an agreement [between chareidi parties] in Elad have failed, and therefore, the election campaigns move forward. Regarding the matter of hakoras hatov and Kiddush Shem Shomayim, we will do out utmost for the success of Yisrael Porush and there is no need to elaborate regarding his extensive accomplishments for the residents of the city”.

The rebbe added, “In the city of Yerushalayim, there cannot be more Kovod Shomayim than the chossid avreich standing at the helm of the city, an askan with true Yiras Shomayim, which precede his intelligence, who stands to serve the Klall Yisrael at any opportunity, and therefore, we must do our utmost towards seeing his success in the campaign.

It is added that Yisrael Porush and Yossi Deutsch were present at the tisch as was Deputy Minister of Education Meir Porush, Yisrael’s father.

Two weeks following the announcement the Bayit Yehudi party is endorsing Jerusalem mayoral candidate Ze’ev Elkin, an agreement was signed between the parties. The head of the Bayit Yehudi list in Jerusalem, Chagit Moshe, signed on behalf of her party.

According to a Kikar Shabbos News report, following are some details of the agreement.

According to the agreement, the “Yerushalayim Tatzliach” faction (Elkin) will work in cooperation with the “Bayit Yehudi” party in order to preserve and promote Beit HaRav Kook in additional to promoting and establishing shuls in places and neighborhoods where there is a shortage of shuls; particularly in the neighborhood of Chomat Shmuel (Har Choma).

Regarding the distribution of portfolios and positions, it was written: “A member of the Beit Yehudi Council will be appointed deputy mayor, but it will be clarified that this commitment will be canceled if Bayit Yehudi receives fewer than two seats.”

It is also said that Bayit Yehudi will hold the following portfolios: The Finance Committee as well as chair of the Finance Committee; which will be given to Chagit Moshe. Should Moshe resign from her post, Elkin will decide who will be appointed in her place.

This may pose issues for Degel Hatorah and Shas vis-à-vis the control of funding, but it was their decision to place their cards on Moshe Leon, who according to polls remains in single digits.

In addition, Bayit Yehudi will receive the State Religious Education portfolio as a sub-portfolio subject to the holder of a general education portfolio. Bayit Yehudi will also receive the chairmanship of the Committee for the Advancement of the Status of the Child. Another significant role is the representation of one member of the local subcommittee on planning and building, in which a representative of the party will serve.

It should be noted that the Me’uchadim (United) faction, which competes with Bayit Yehudi for votes of the dati leumi tzibur in the city, is negotiating with Elkin and Leon.

Kikar Shabbos News reported that Leon proposed the role of Chairman of the Finance Committee to Dov Kalmanovich and a significant role in planning and construction to Aryeh King together with the post of Deputy Mayor.

The Likud candidate in the Jerusalem mayoral race, Minister Ze’ev Elkin, took part in second hakofos on motzei Simchas Torah in a number of Jerusalem neighborhoods. He received a bracha from the elder of the Rishon L’Tzions, HaGaon HaRav Eliyahu Bakshi-Doron Shlita.

Elkin visited the Zechus Avos shul in Katamon as well as the Migdal David Shul, and he was honored with a Sefer Torah at both venues. From there he traveled to Gilo in the southern capital, where second hakofos were run by the head of mosdos Yad Asher, HaRav Moshe Ben-Abu, and during those hakofos, the minister was warmly received, and he was also given a bracha by Rav Ben-Abu for success in the upcoming elections. He then visited the Kehillos Yaakov Shul in Baka headed by Rav David Maimon. 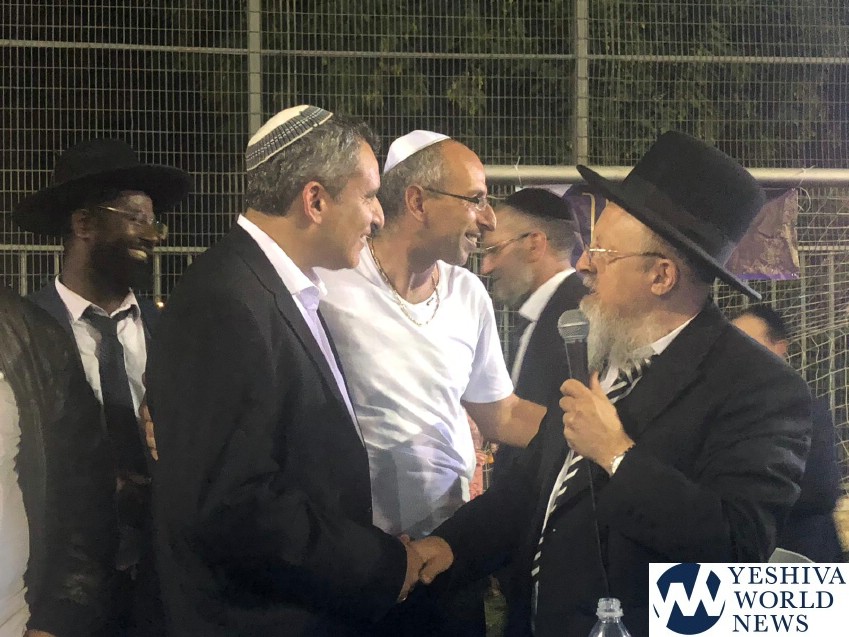 When he arrived in Kiryat Menachem, Elkin received a bracha from Rav Bakshi-Doron Shlita, at the Zichron Avraham Shul. The rav of the neighborhood, Rav Michael Amos gave him a Sefer Torah to dance with as well, and he danced with Shas Deputy Mayor Tzvika Cohen.

Elkin then traveled to Kiryat Yovel and was met by the rav of the Yeshiva L’Tzeirim, Rav David Simchon.

In the Katamonim neighborhood, he was greeted by Rav Crispin, who last week called on his followers to vote for Elkin in the mayoral race. 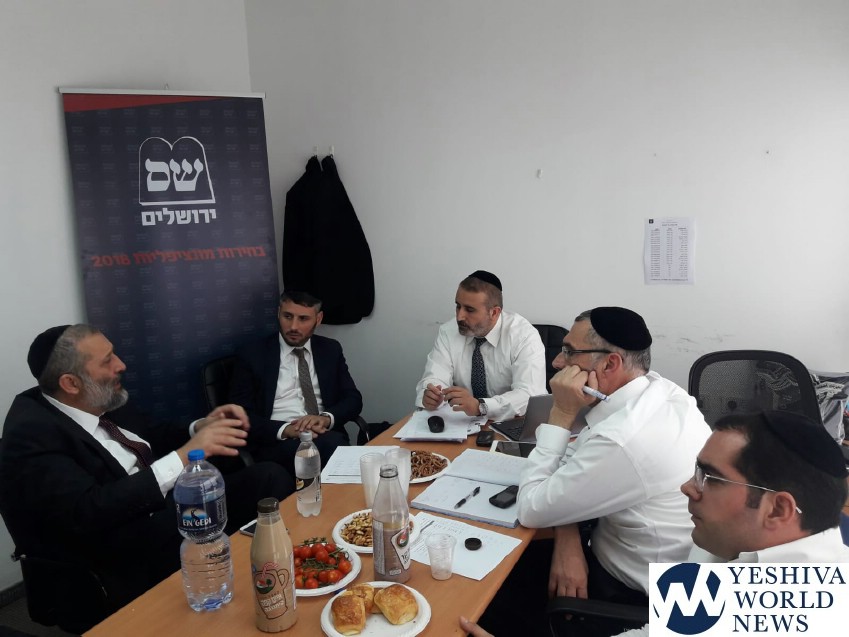 Shas party chairman, Interior Minister Aryeh Deri on Tuesday, met with party officials in Jerusalem ahead of the mayoral race in the capital. The meeting was head in the party’s election headquarters, with Deputy Mayor Tzvika Cohen and Shas director-general Rav Chaim Biton taking place.

Deri is working on strategy to persuade voters to get out and support Shas’ list on election day.

Both Shas and Degel Hatorah are backing candidate Moshe Leon for mayor, and not the chareidi candidate, long-time Deputy Mayor, Yossi Deutsch, of Agudas Yisrael.

One of the top three leading candidates in the Jerusalem mayoral race, Ofir Berkowitz, took part in second hakofos on motzei Simchas Torah, visiting a number of different neighborhoods in the capital.

Berkowitz, of the Hisorarus party, was in Emanuel Moreinu Park in the Pisgat Ze’ev neighborhood of the northern capital, as well as in Kiryat Yovel, and then he visited the Ramada Hotel where the annual second hakofos hosted by the Razel family was held. 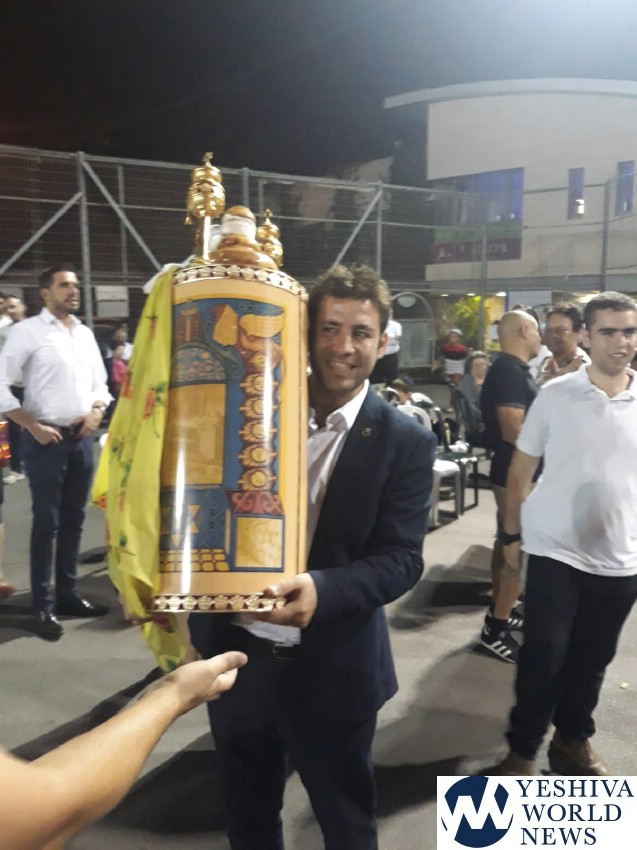 Berkowitz was warmly received by all. He is among the top candidates along with Ze’ev Elkin.

Jerusalem mayoral candidate Yossi Deutsch (Agudas Yisrael) on motzei Simchas Torah, participated in second hakofos near Shar Shechem in the Old City, at the site of the murders of Nechemia Lavi HY”D and Aharon Bennet (Benita) HY”D, in the so-called Muslim Quarter. Hundreds of bnei Torah from dati leumi yeshivos took part in the event. 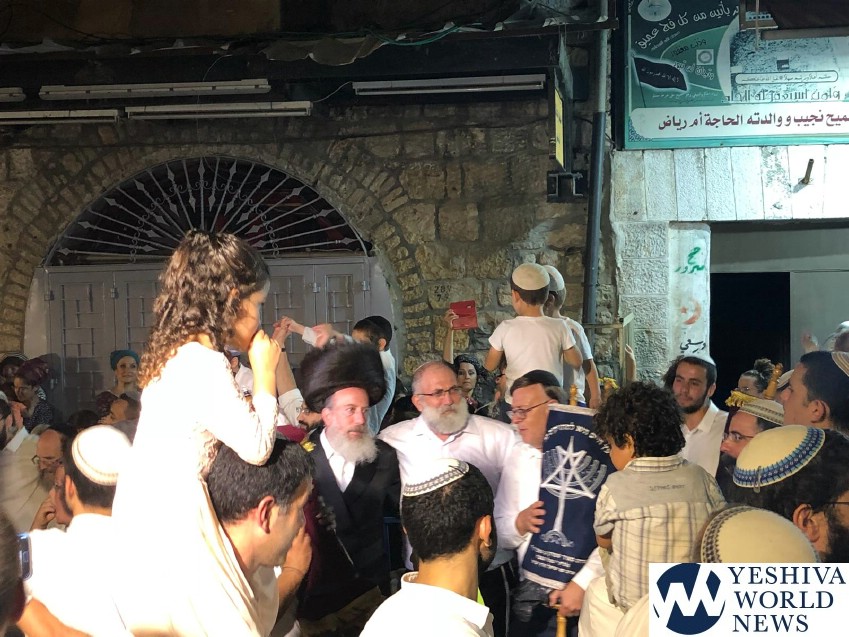 Deutsch stated that three years following the attack they are now dancing with a Sefer Torah at the same location, citing the two both loved Yerushalayim.

Among the participants was Mati Dan, a well-known personality dedicated to efforts to liberate all areas of Yerushalayim from Arab occupation.

Jerusalem Mayoral candidate Ofer Berkovitch has thus far kept a low profile in the campaign to become the next mayor of Israel’s capital. Berkovitch who runs the Hitorerut party, a largely secular party in the city council, has run on a liberal platform following his party policies on inclusion and keeping Jerusalem open for all. Berkovitch has even focused on trying to convince young Charedi voters to vote for his party and candidacy. Berkovitch headed to the Shuk Arba Minim in Geulah in order to gain support and also approached various Rabbis asking for their blessing of his campaign.

On Tuesday, B’Chadrei Charedim news outlet published an article which documented an agreement that Berkovitch made with attorney Yossi Chavilav, who withdrew his candidacy for mayor and is instead supporting Berkovitch. The document, which was published by the news site, has raised concerns among the Charedi community with regards to the upkeep of the status quo with the city’s relationship to the Charedi populace. The agreement states that Berkovitch will maintain Jerusalem as a pluralist, open city for all segments of the populace and include the opening of entertainment venues on Shabbos and allowing for public transportation in a limited fashion in certain areas of the city while attempting to keep the spirit of Shabbos alive.

Another part of the agreement states that the city will attempt to prevent the construction of Charedi institutions, such as yeshivot and shuls in mixed neighborhoods.

The agreement also would appoint Chavilav as the Deputy to Berkovitch should he be elected, even if Chavliav only succeeds at obtaining one seat on the City Council for his list. The two leaders would also combine to form a united front on the council should Berkovitch not be elected as the Mayor, thus helping prevent a Charedi majority on the council.

According to a recent poll conducted by the Smith Institute For Market Research, Berkovitch is currently slated as the runner-up in the election with Moshe Leon leading the candidates.