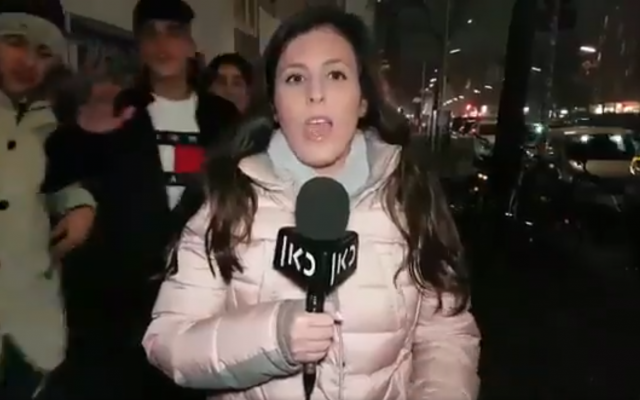 An Israeli journalist was recently attacked in Berlin while trying to film a report, with video capturing a group of men harassing her and then apparently attacking her with a firecracker.

Antonia Yamin was preparing to broadcast live on the street, and was speaking Hebrew, when the men came up from behind her, with one reaching out a hand to interrupt her.

Then, as they continued walking, they tossed a lit firework at the shaken reporter.

The four youths, described in German newspaper Bild as having a ‘migrant background’, are said to have run away to a nearby underground station.

A video of the incident was published on Twitter by Yamin on Sunday, Europe correspondent for Israel’s public broadcaster Kan.

Yamin was born in Mannheim to a German Christian mother and an Israeli father, and has lived in Israel since childhood.

The attack occurred in Neukölln, one of Berlin’s 12 boroughs, and is known to have one of the highest percentage of immigrants in the German capital, although it has undergone rapid gentrification in recent years.

Yamin later tweeted that she had been asked by police to give a statement but was hesitating to label the attack as anti-Semitic.

Speaking to Bild, Yamin suggested she was targeted because she was speaking Hebrew and had Hebrew writing on her microphone, although she said she did not know definitively if that was the reason for the attack.

“The assault against journalist Antonia Yamin is not acceptable,” Maas wrote on Twitter Tuesday. “That an Israeli reporter cannot report undisturbed in Hebrew from some places must not be allowed. In Germany, journalists must be able to work safely – in no matter what language.”

Germany was shocked by a case of anti-Semitism in April involving a Syrian migrant who assaulted a man wearing a Yamulka with his. A video of the street street assault went viral and sparked widespread public revulsion, and triggered large street rallies in solidarity with Jews.

In July, dozens of Jewish organizations in Germany called on the government to crack down on anti-Semitism following a string of anti-Jewish attacks, perpetrated by Muslim immigrants and by people identifying with the far-right.

3/ I take the subject very seriously. I do not know for certain why the young men threw the firecracker. I can only talk about facts and they are: I spoke Hebrew while reporting on the street, my microphone has the name of my channel written on it in big Hebrew letters

5/ behave as if the street is theirs and this is not okay! I (even though half German) know that I am a "guest" in this country and that is why I often set myself higher standards of behavior – because that's what guests in a country are supposed to do.

Thank you foreign minister @HeikoMaas for the kind words. What happened will not change the special place I have for Germany in my heart ❤️ 🇩🇪🇮🇱 https://t.co/4eBH1W7gls