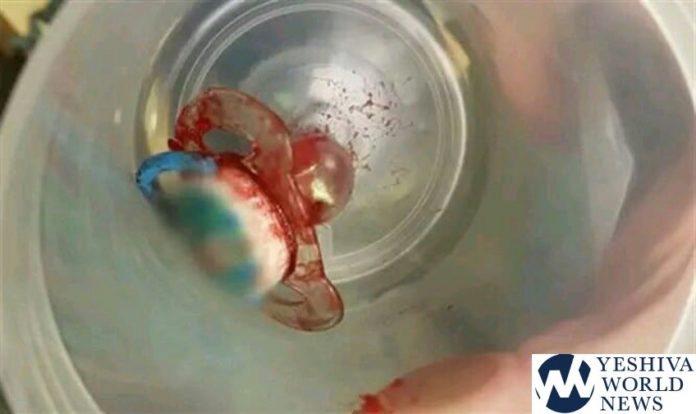 A one-and-a-half-year-old baby was taken by ambulance to the emergency room at Hadassah Ein Kerem Hospital after swallowing his entire pacifier while asleep in the caretaker’s home in the Kiryat Yovel neighborhood in Jerusalem.

After she noticed that the pacifier in his mouth was stuck deep in his throat and could not be pulled out, she quickly evacuated him to the clinic of the nearby HMO and from there by ambulance to Hadassah.

Dr. Itai Gross, a pediatrician who received the baby in the emergency room, describes: “The baby arrived with MDA and accompanied by a doctor from the HMO and suffered from severe shortness of breath. His breath sounds signaled the true nature of the emergency, snorting and with poor air exchange, in a real life-threatening situation.”

“We understood from the pacifier’s position, that it could not be pulled out in the emergency room, despite the efforts of a specialized team that arrived immediately. After his condition stabilized including respirations and anesthesia in a tube that carefully bypassed the pacifier was administered, he was rushed to the operating room,” the doctor said.

Chaggai Nisani, the father of the boy, said: “I received a phone call informing me that Hillel had swallowed a whole pacifier, and that his nurse did not lose her cool, rushed with him to the HMO and within a minute they were there, and they assisted and MDA evacuated him quickly to Hadassah.”

Dr. Menachem Gross, head of the Pediatric Ear Nose & Throat Unit, and Dr. Nir Hirschhorn, an ENT specialist, analyzed the baby together with a senior anesthesiologist in a delicate and complex procedure.

“The pacifier, a completely standard pacifier with a hard-plastic handle and base, was located deep in his throat and esophagus,” says Dr. Gross, adding “the danger was that the upper airways would be blocked because the pacifier was stuck deep in the throat of the baby laterally.”

“In the operating room, when the baby was breathing and anesthetized, we maneuvered and extracted the pacifier from the cavity of the pharynx, and we managed to remove it without making any cuts, and we pulled it out completely through the throat.

“It’s a normal pacifier, the front part of which is silicon, but the rest is made of hard plastic,” he said, adding: “They were afraid of swallowing rubber-based pacifiers, but now they are making pacifiers with a plastic part and a wide diameter so that such an event does not happen” explained Doctors Gross and Hirschhorn.