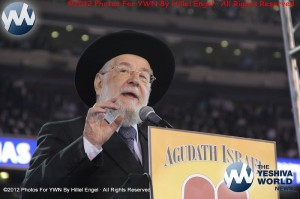 According to a Kol Chai Radio report aired on Wednesday evening 7 Iyar 5773, Tel Aviv Chief Rabbi Yisrael Meir Lau Shlita, a former Ashkenazi chief rabbi, is contemplating entering the race for chief rabbinate. Rabbi Lau is aware that as is the case with Rabbi Yaakov Ariel Shlita, he is too old to run, however, if Shas continues to push its so-called ‘Amar Law’, which seeks to permit Rishon L’Tzion HaGaon HaRav Moshe Shlomo Amar Shlita to run for a second term, the law will also clear the way for him to run since it too addresses the age barrier, currently set at 70. Other reports state that Rav Lau will not run and in return, the Chief Rabbinate will automatically extend his term as the chief rabbi of Tel Aviv for an additional five years, until the rav is 80. All the reports are currently in the realm of speculation and/or media leaks. The current law permits the rav of a city to serve until the age of 80 providing the Chief Rabbinate approves the move.

The report quotes people close to the Tel Aviv chief rabbi signaling that if the age barrier is removed Rabbi Lau will certainly enter the race, a move that would totally change the playing field while the chareidi and dati leumi communities are working to decide on their candidate. Rav Lau, who enjoys across-the-board popularity, would most likely compel all others to drop out of the race if he does decide to announce his intention to run for the Ashkenazi chief rabbi post.

In a related item, Tzfas Chief Sephardi Rabbi Shmuel Eliyahu Shlita was interviewed by Kol Chai, asked to comment on the race and the ongoing effort by the dati leumi tzibur to back Rav Ariel. This would be contingent on a deal with Shas as was reported, a deal that would compel the dati leumi parties to support Rav Amar’s bid for a second term as Sephardi chief rabbi.

Rav Eliyahu explained that “out of respect for Rabbi Chaim Druckman” and his status as a leading dati leumi rav; he would respect the deal surrounding Rav Ariel, even though he is aware that such a deal would bar him from running for the post of Sephardi chief rabbi. Many feel that Rabbi Eliyahu is a most suitable candidate for the post and it is time for younger leadership and dati leumi representation.

When asked to comment on the fact that the dati leumi community seems to show a willingness to cut a deal for the Ashkenazi post and leave the Sephardi post t to the chareidim, Rabbi Eliyahu stated that if we are dealing with a specific case towards achieving a goal then it is okay but if this has become an adopted policy, then it is unacceptable.