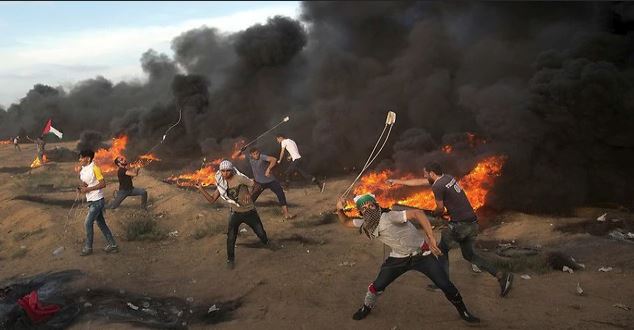 As Shabbos began in Israel, Security forces neutralized four terrorists who were participating in violent protests near the Gaza border and threatened the lives of soldiers working in the area.

Gaza’s Health Ministry claimed that an additional 40 people who participated in the protests were injured as well. More than 8,000 protesters participated in Friday’s violent protest this week that including rock-throwing, launching improvised explosive devices (IED’s) at security forces, and throwing hand grenades at soldiers. The IDF responded wit crowd dispersing non-lethal ammunition. Friday’s protests were the deadliest in a month and a half of relatively restrained protests that saw one fatality.

The IDF’s Criminal Investigation Division opened an investigation into Thursday’s incident in which a Palestinian driver was killed at the checkpoint in Samaria near the town of Ofra. The IDF said soldiers fired warning shots in the air when the driver ignored orders to halt, but the car sped up instead. Soldiers then opened fire on the vehicle, killing one suspect.

The IDF said it was on high alert in the area after shots were fired from a Palestinian village late Thursday. The Palestinian Health Ministry identified the dead passenger as Qasim Abbasi, 17, from east Jerusalem.

Two men in their 20’s were found seriously injured on Shimshon HaGibor Street in Ramle. After being transported to the hospital, one of the men was pronounced dead in the hospital. Police have opened an investigation into the incident and are saying that the incident is criminal in nature.

A motorcyclist was killed near the entrance to Nahariya after getting into a self-inflicted car accident. According to police, the motorcycle was stolen and th driver veered out of his lane and into a tree.

Fire and Rescue Teams in conjunction with special rescue units from Jerusalem’s Fire Department were dispatched to rescue a number of people who got trapped whie repelling into a cave in the industrial section of Atarot, north of Jerusalem. Search and Rescue Unit personnel from Megillot Search and Rescue Unit assisted in extracting the people from the cave.

Dozens of United Hatzalah emergency medical service volunteers from the Carmel region left their Shabbos Dinner tables in order to search for a child who had gone missing. Regional Head of United Hatzalah Naftali Rottenberg said after Shabbos: “We received a request from the Haifa police department to help locate a boy with special needs who had come to spend Shabbos in Haifa and disappeared. They requested the assistance of our volunteers in the search because we can mobilize a large number of volunteers across the city in mere seconds. This is why we are here.

We made one phone call to Moishe Berman, head of the Haifa chapters in order to notify the necessary Rabbonim so that they could make the issue known in their communities, and another phone call to one of our Druze team leaders Rayan Amasha who understand everything that is involved in being a “Goy Shel Shabbos” for a community that is “Shomer Torah U’Mitzvos”. He ran point on the logistics for the search.

The Rabbonim said that we should do everything we could to find the boy. We sent a message out to the network of volunteer and no less than 60 men and women left their Shabbos tables to help the search. Together with a logistics leader from Zaka, and officers from Haifa police force we began the search and garnered the help of another 80 Yeshiva bochrim.

After a while of searching one of the volunteers searched a building with a security guard and found the boy on the tenth floor of the building alive and well. When he came down and the announcement was made, all of the volunteers gathered and sang “May this hour be an hour of mercy…” We then headed back to our homes to enjoy the rest of the Shabbos meal with our families.”

A young child of one-and-a-half years was saved by a police volunteer on Friday night in Beit Shemesh after the boy had lost consciousness. Worried residents alerted a passing police car, whose volunteer officer ran to where the toddler was and began CPR. The toddler began to wake up and was transported to the hospital for further medical care.

A 30-year-old motorcyclist was moderately injured  in a car accident with a private car on Highway 471 near Kiryat Ono on Motzei Shabbos. The motorcyclist was treated at the scene by a United Hatzalah paramedic ad EMTs before he was transported to the hospital for further care.

A bus slipped off the road near Kabri intersection on Highway 89 in the Galil. United Hatzalah and Magen David Adom EMS teams treated 16 injured people who were on the bus. One 18-year-old girl was moderately injured, the rest luckily, only sustained light injuries.

An infant was injured in the Pisgat Ze’ev neighborhood of Jerusalem after a TV fell on her on Motzei Shabbos. Magen David medical personnel treated the young girl and transported her to Hadassah Ein Kerem hospital in moderate condition.