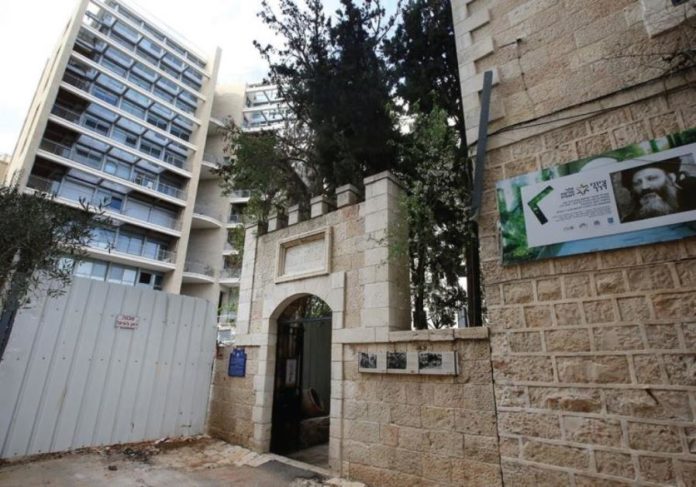 After a long period of time in which the historic structure of Beit HaRav Kook was in danger of being closed due to its precarious situation. However, last Thursday a legal solution was found that allowed the Ministry of Jerusalem Affairs & Heritage to allocate money for the rehabilitation and preservation of balconies and the entrance staircase, thereby preventing the closure of the site. The cost of the repais is estimated at NIS 450,000.

Minister of Jerusalem Affairs & Heritage Ze’ev Elkin: “Beit HaRav Kook is a structure of historic importance not only for religious Zionism, but for the State of Israel as a whole. Rabbi Kook had a significant contribution to the establishment of the state and the settlement of the land. Therefore, as soon as we heard that the Jerusalem municipality had to issue a demolition order on the building’s balconies, we worked to find a solution to save the structure. I am happy to have found a solution, and the rav’s house will be able to continue its activities.”

About two years ago, in September 2016, after the government declared Beit HaRav Kook a heritage site, Minister Elkin, who is also in charge of the Environmental Affairs portfolio, announced that he plans to invest NIS 3 million in renovating the site.

Last September, however, the Jerusalem Municipality issued an immediate demolition order for the four balconies and the steps leading to the building that served Rabbi Kook and his family during his tenure as Chief Ashkenazi Rabbi of the Jewish community in Eretz Israel. A closure order was issued.

When the order was received, the members of the organization operating the site approached Elkin and explained the complicated situation, asking him to intervene. However, due to a legal dispute over the ownership of the building between the association that operates the Beit HaRav Kook the General Committee of Jerusalem, which contributed the building to the rabbi while he was appointed to the position, there was a difficulty in allocating money for the preservation of the balconies.

The Jerusalem Ministry proposed a plan according to which the rehabilitation work will be carried out through the municipality. The outline was approved in principle by the legal entities, and in the coming days its implementation will be promoted.

Beit HaRav Kook is one of the most important historic buildings in Jerusalem. In the early years the building served as the Yeshivat Merkaz HaRav until the yeshiva moved to Kiryat Moshe and the great rabbis of religious Zionism were educated there, including the Chief Ashkenazi Rabbi of Jerusalem, HaGaon HaRav Aryeh Stern Shlita.