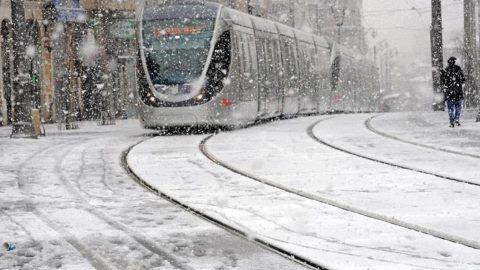 The past days have been sunny and unseasonably warm, with temperatures climbing into the 60sF. However, the break in winter is over as rainfall was reported during the nighttime and early morning hours in many areas, including Jerusalem.

There are flood warnings in effect in eastern and southern rivers as wave heights are expected to reach 1.5 meters, five feet. During the night between Wednesday and Thursday, the rain is expected to intensify, and there will be thunderstorms in areas of the country.

Temperatures will drop as bit on Thursday, and showers are expected in most areas of the country.

Friday is expected to bring back seasonable weather, accompanied by clouds and some sunshine. There is a possibility of rain and even thunderstorms, from the north to the center of t he country. Snow is expected in the Mount Hermon area of the Golan Heights.

The current forecast for Shabbos calls for intermittent showers in the north. Temperatures will be below the seasonable average. Flood warning will be in effect in the Judean Desert and Jordan Valley areas.