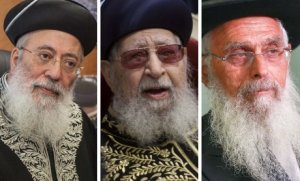 Following the announced deal between the Shas and Bayit Yehudi parties pertaining to the race for new chief rabbis, Rishon L’Tzion Rabbi Moshe Shlomo Amar Shlita and Rabbi Yaakov Ariel Shlita have announced they are together and speak in one voice in their desire to work to promote and protect Yiddishkheit in Eretz Yisrael.

The two announced following Maran HaGaon HaRav Ovadia Yosef’s Shlita acceptance of the deal that in recent days, they have received many letters and requests from Gedolei Yisrael Shlita, rabbis of cities and many others supporting their candidacies. Bayit Yehudi leader Minister Naftali Bennett has yet to announce if he agrees to Chacham Ovadia’s condition for supporting the deal.

Following the announced deal, Dayan Rav Eliezer Igra announced he was pulling out of the race. No statement has been released as of yet by Modi’in Chief Rabbi David Lau or Shoham Chief Rabbi David Stav. Before Shavuos, the Labor party joined the Yesh Atid and The Movement parties in announcing its support for Rav Stav’s candidacy for Ashkenazi chief rabbi.