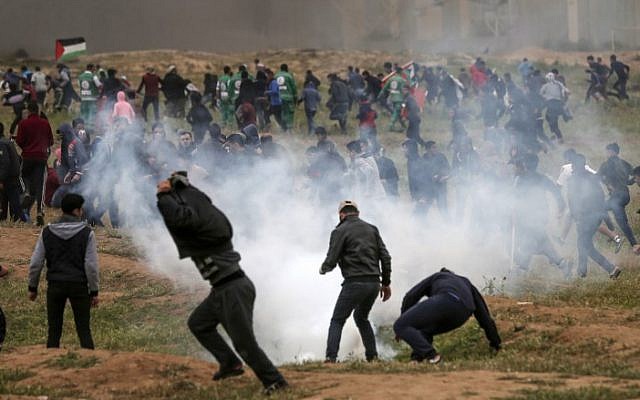 Following the Earth Day protests in Gaza where some 40,000 Gazans protested at the Israeli border, Israel agreed to open the Erez and Kerem Shalom crossings to trucks bringing supplies into Gaza as well as extend the fishing area for Gazans.

On Saturday night, five rockets were fired from Gaza into Israel. According to the IDF spokesperson at least three of those rockets landed in open fields.

During the protests, which mark the 1-year anniversary of the first Friday riot at the border on March 30th, 2018, four Gazan terrorists were killed by Israeli security forces. The deceased were engaged in violent activities that threatened the lives of Israeli security personnel on the Israeli side of the border.

According to a statement issued by the Gaza Health Ministry, hundreds of rioters were injured including six who were critically injured. Many of those injured suffered their injuries due to the riot and the other rioters inside Gaza and not as a result of IDF intervention.

A young man suffered a partial amputation while baking matzos in a matza factory in Petch Tikvah on Shabbos. He was treated by United Hatzalah volunteers and transported by one of the organization’s ambulances to Beilinson hospital.

A 30-year-old man was critically injured after he was shot in his upper body on Hashomer Street in Ashkelon. He was treated at the scene by United Hatzalah and Magen David Adom EMS teams. Police have made an initial report in which they claim the incident was criminal in nature. A full investigation has been opened.

A car was severely damaged after it was hit by rocks thrown at it by terrorists in the  Palestinian village of  Azzun, located near Karnei Shomron on Highway 55. Terrorists from the village also threw a molotov cocktail at passing Jewish cars on the Highway.

A balloon bomb caused a fire in Nachal Shikmah located in the Gaza periphery.

Two Jordanian workers were killed by a falling tree at Izmargad Street in Eilat. United Hatzalah volunteers together with Magen David Adom teams rushed to the scene but were forced to pronounce the workers dead due to the severity of the injuries that they suffered.

A motorcyclist was critically injured in a motor vehicle accident that took place on Highway 6, near Kiryat Gat.

A young man was stabbed in Rehovt in a criminal act and was moderately injured. He was treated at the scene by United Hatzalah.