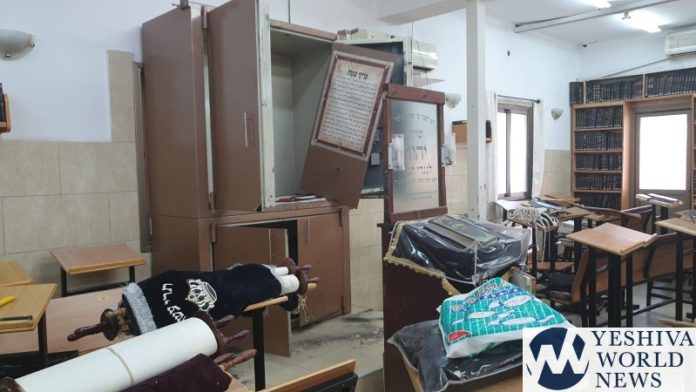 Israel Police has assigned a special investigation team to probe the theft of four Sifrei Torah from the Tiferes Shimon Shul in Bnei Brak, an attack during which vandals threw a fifth Sefer Torah and Sifrei Nevi’im on the ground as well as causing considerable damage to the shul and Aron Kodesh in particular.

This latest horrific attack joins a growing number of break-ins into shuls around Israel in recent months, including a vandalism attack against a shul in the Kiryat Yovel neighborhood of Jerusalem, in which Sifrei Torah were thrown to the ground as well. The suspects in that attack remain at large to this day.

Police have decided to appoint a special investigation team to this latest shul break-in.

When mispallalim arrived early Tuesday morning, they were horrified to see the sight, the Aron Kodesh open and the Sifrei Torah gone, expect for one which was on the ground alongside Sifrei Nevi’im.

Many arrived in the shul later on Tuesday to take part in an atzeres hisorarus following the break-in, with the shul located in the heart of Bnei Brak, on Rabbi Akiva Street.