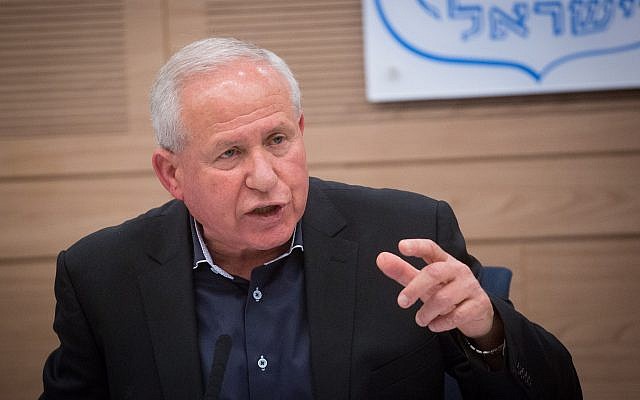 “The Palestinian Authority is 100% to blame for the failure of the Oslo Accords,” said former ISA (Israel Security Agency/Shin Bet) Director, MK Avi Dichter to a packed Tel-Aviv audience on Sunday night.

Dichter made his remarks at special conference organized by Im Tirtzu in collaboration with Canadians for Israel’s Legal Rights on the topic of Israel’s legal rights.

Dichter discussed the history of Israel’s legal rights and the passage of the Nation-State Law, which after first being sponsored by Dichter in 2011 was finally passed by the Knesset in July 2018

“There are no greater hypocrites than the Israeli Left,” said Dichter about the Left’s opposition to the law. “The Nation-State Law cements in law the Jewish People’s national rights but does not infringe on anyone else’s civil rights.”

The conference, which was dedicated in memory of Rabbi Achiad Ettinger HY”D who was murdered this past March in a terror attack, began with a talk from popular Israeli journalist Amit Segal.

Also present at the conference was Sheffi Paz, a social activist in South Tel-Aviv. Paz noted that while Israel has the legal rights to the land, the government has abandoned South Tel-Aviv and is unwilling to tackle the problems caused by the influx of thousands of illegal migrant workers.

Goldi Steiner, founder and co-chair of Canadians for Israel’s Legal Rights, said that learning about Israel’s rights is the key to combating false claims against Israel.

“There is only one way to counter the ever-growing accusations of apartheid, occupation, and all the lies propagated by anti-Israel organizations like IfNotNow and B’Tselem, and that is through education.”

“When discussing the conflict, it is critical to first understand that the Jewish People have legal rights to the Land of Israel,” said Peleg.

“This is precisely why we have teamed with Canadians for Israel’s Legal Rights to educate students and the broader public about Israel’s legal rights,” added Peleg.