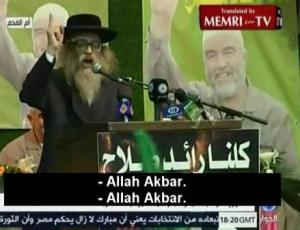 Prominent Neturei Karta official Yisrael Hirsch interviewed on Kol Berama Radio on Wednesday morning 3 Menachem Av 5773, speaking with Mordechai Lavi. He was of course asked to comment on the attack against a chareidi soldier on Tuesday night, in Meah Shearim.

Yisrael Hirsch praises the attack against a chareidi soldier in Meah Shearim on Tuesday night, the eve of 3 Menachem Av 5773. Hirsch explains he was not there when it occurred and heard about it later, calling it a “spontaneous act”.

“At present we are in the day of the Churban Bayis. We all know what this symbolizes”. He explains “there is a spontaneous response from chareidim in Meah Shearim and nationwide” as a result of the ongoing effort to compel bnei yeshivos to serve in the IDF.

Hirsch stated that the soldier was verbally insulted but not physically assaulted and he feels the act was a welcome one. (Hirsch’s statement is confirmed by prominent chareidi affairs correspondent Avishai Ben-Chaim, who on his Facebook page states the soldier was not physically assaulted, basing his information on statements from police investigators).

When asked why the act is praiseworthy, Hirsch explains “There is no such thing as a chareidi soldier. There is a chareidi or a soldier. The moment he enters the IDF he begins the road to becoming non-frum.”

Hirsch compares this to one who enters your home without authorization – demanding immediate action. This is the case when an IDF soldier enters Meah Shearim.