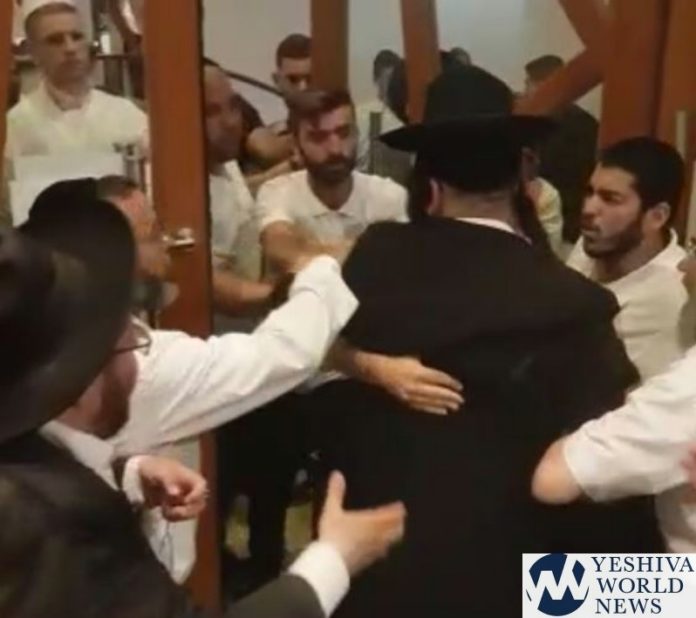 There are various versions of why there was insufficient space in the dining room of the Royal Dead Sea Hotel over Shabbos and earlier this week, during bein hazmanim, depending on whom one speaks to.

According to hotel management, many chareidi families booked rooms for a couple plus two children, when in fact there are six or eight children. While they may be willing to squeeze into the room, not addressing the matter of gezel here, the problem arises when the family of four is actually a family of eight or ten, leading to a severe shortage of seats in the dining room as well as a shortage of food.

As seen in the accompanying videos, there were fights at the door and police were summoned to restore order. Some report that there were hundreds of children present in the hotel who were not officially booked in when reservations were made.

According to another version, that of guests, the hotel was simply overbooked and therefore, there is no room. Yet another explanation is that some guests in the hotel invited friends to join them in the dining room for meals, hence the overcrowding.

Whatever the reason, the situation made the evening news, as seen in the Channel12 News video, and once again, not painting chareidim in a good light, albeit with good reason in this case, as we see persons out of control trying to get into the dining hall. In one case, many guests with small children were waiting over two hours, and shortly after 8:00PM, they were still unable to receive dinner and the dining hall, and the staff were simply unable to accommodate the number of people wishing to eat.

Police were summoned to restore order.