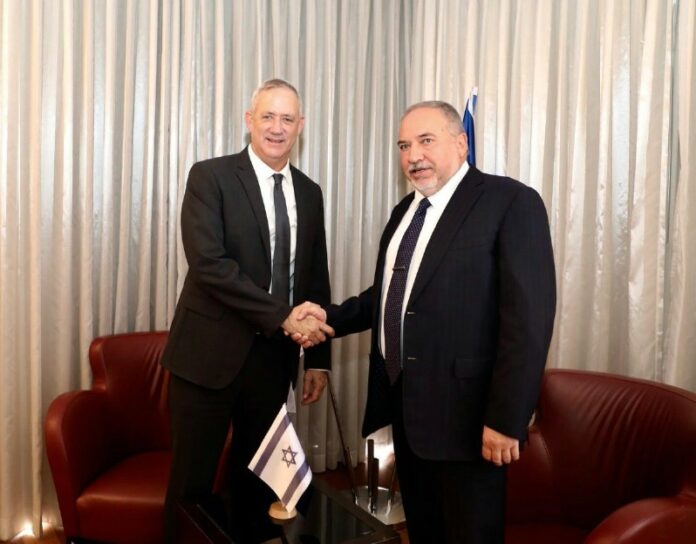 There is now a genuine fear that Chairman of the Blue & White Party, MK Benny Gantz, will present President Reuven Rivlin with his minority government to prevent a third round of elections. This minority government would include the left-wing parties and Yisrael Beitenu, riding on the support of the Joint Arab List which will remain a member of the opposition. From the perspective of the Joint Arab List, the goal is to oust Prime Minister Binyamin Netanyahu.

According to a report appearing in the daily Yisrael Hayom newspaper on Sunday, Chairman of Yisrael Beitenu, MK Avigdor Lieberman called to accelerate talks with the Joint Arab List towards pressuring Netanyahu to be more flexible and agree to terms to partner with the Blue & White party.

In stage one, the parties will not sign a document outlining the guidelines which is to govern the incoming coalition, but they will make do with an understanding, all towards pressuring PM Netanyahu to enter into agreement with Gantz. If Likud does not come on board, Blue & White may present his minority government to President Reuven Rivlin, leaning on the Joint Arab List opposition party to back the government, at least towards ousting the prime minister, at which time new elections are likely to be called.

Blue and White, Yisrael Beytenu and Labor-Gesher together have 47 seats. The Democratic Union would give the coalition five more seats. It is possible that either all 13 Joint List MKs, or at least the 10 not affiliated with the extremist Balad party will support a minority government from outside the coalition with a parliamentary safety net.

“Significant progress has been made toward drafting fundamental principles, particularly with respect to issues of religion and state,” Blue and White and Yisrael Beytenu said in a joint statement following coalition talks on Sunday.

Meanwhile, with just four days remaining for Blue & White Chairman MK Benny Gantz to form a coalition government, Defense Minister Naftali Bennet called on him not to enter into a minority government that rests on support of the Joint Arab List from the opposition.

“If the Government of Israel was dependent on the Joint Arab List, the 25 terrorists who were eliminated this past week would still be alive” Bennet explained. He added, “From the perspective of the very same MKs, the IDF operation was ‘murder’ as they put it.”

In a Reshen bet radio interview, MK (Joint Arab List) Dr. Ahmed Tibi announced there is a possibility that his party will support a minority coalition headed by MK Benny Gantz and including the Yisrael Beitenu party chaired by MK Avigdor Lieberman. “There is contact, but a formal offer has not been made.”

Tibi responded to the condemnation of the remarks made by Arab MKs during last week’s counter-terrorism military operation in Gaza.

“There is no symmetry between the occupier and the occupied – between one who imposes a blockade on Gaza and the one under the blockade” he explained.

Later in the interview, Tibi commented on reports of a possible minority government forming with the support of the United Arab List from the opposition as well as MK Avigdor Lieberman and his Yisrael Beitenu party.

“The Joint List is willing to do a great deal in the framework of its principles that its selection is towards ousting Netanyahu, the leader who incites and lies on condition there are gains for the Arab sector,” he explained.

Tibi admitted that the party is in contact with coalition negotiators but to date, the Arab party has not received any official offer.

Likud has announced an urgent gathering will take place on Sunday at 6:00PM in Tel Aviv’s Convention Hall. The gathering will bring hundreds of party members and right-wingers, as they too are invited. The participants will publicly call on Blue & White not to build a coalition which rests on the support of the Arab list.

The prime minister delivers a message to the tzibur to come and participate.

While thousands are expected to participate in the event, the chareidim informed the prime minister that while they support him and remain loyal to the right-wing bloc, the chareidi tzibur at large will not be attending.