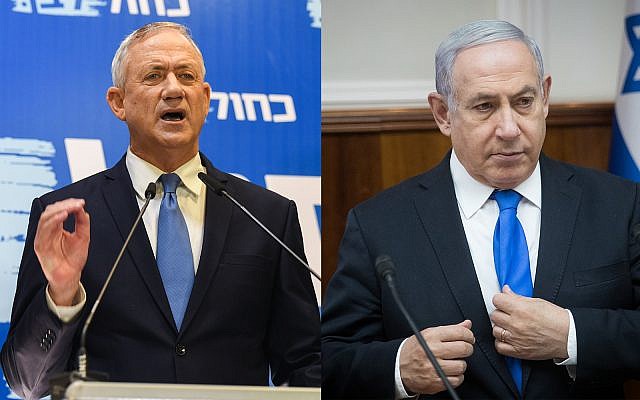 Talks held on Tuesday afternoon between Prime Minister Binyamin Netanyahu and chairman of the Blue & White party, MK Benny Gantz, broke down, once again surrounding a lack of trust that PM Netanyahu will step down and permit Gantz to serve as prime minister when the time comes. Once again, Likud officials are pointing a finger of blame for the breakdown in talks on MK Yair Lapid.

The meeting began before 6:00PM and the Kirya (Defense Ministry) in Tel Aviv, and after 40 minutes, the dialogue broke down. According to the Likud version, Gantz refuses to trust Netanyahu and therefore, insists on serving as prime minister first. While Netanyahu is willing to guarantee stepping down within six months, Gantz is unwilling to accept the offer.

Netanyahu proposed unique legislating that would anchor his stepping down, but this too was met with refusal. Likud officials now report they have done everything possible, but all reasonable offers have been met with refusal by the Blue & White leader. Likud blames MK Yair Lapid, who Likud insists vetoed the deal because he remains opposed to a national unity government including Likud.

Likud is now reporting there will not be additional offers made. Blue & White on the other hand blames Likud and PM Netanyahu, insisting the latter is determined to take the nation to round three of elections.