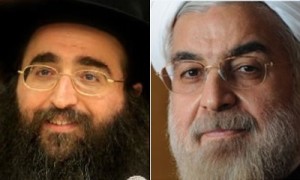 There is still some discussion regarding the reported Rosh Hashanah greetings sent to Prime Minister Binyamin Netanyahu from Iranian President Hassan Rohani.

Whatever the case may be, there appears to be another surprising initiative from the Iranian president, for Maariv reports the American-Iranian Institute based in the United States has invited Rabbi Yoshiyahu Pinto to meet with Rohani. The report states the two are planning to meet on September 26, 2013 during the United Nations General Assembly in New York City. Foreign Minister Javad Zarif is also expected to take part in the meeting.

Maariv reports that Rav Pinto has not responded yet, and he will be conferring with a number of state officials in Israel before announcing his decision. It appears the invitation is the result of efforts from Italian businessmen who maintain a connection with Rabbi Pinto as well as with state leaders in Iran.