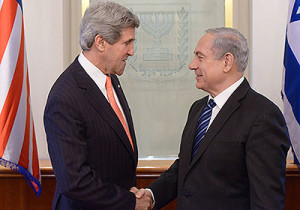 Israeli Prime Minister Benjamin Netanyahu has “every right” to voice his opposition to a potential nuclear deal with Iran but his fear that a deal would leave Israel vulnerable is unfounded, Secretary of State John Kerry said Monday.

Amid an unusual and highly vocal spat between the Obama administration and Israel over Iran, Kerry said he had great respect for Netanyahu and his concerns. But Kerry maintained that instead of making Israel less safe, an accord with Iran would actually reduce the country’s risk.

“I have great respect for his concerns about his country,” Kerry told reporters at a State Department news conference with visiting Turkish Foreign Minister Ahmet Davutoglu. “The prime minister should express his concerns and he has every right in the world to publicly state his position and defend what he believes is his interest.”

He stressed that the United States is deeply committed to Israel’s security and sought to assure Netanyahu, ordinary Israelis and pro-Israel members of Congress who are opposed to the proposed agreement.

“Nothing that we are doing here, in my judgment, will put Israel at any additional risk,” Kerry said. “In fact, let me make this clear, we believe it reduces risk.”

Since word emerged earlier this month that an agreement with Iran may be close, Netanyahu has led a very public campaign to oppose it. He has called the deal bad for Israel and a gift to Iran. The deal could ease some sanctions against Iran but would not require it to give up all uranium enrichment and not immediately halting work on a plutonium facility.

Negotiators are to meet again later this week in Geneva in hopes of concluding a deal but Kerry declined to predict if they would reach an agreement.

“I have no specific expectations with respect to the negotiations in Geneva except that we will negotiate in good faith and we will try to get a first-step agreement and hope that Iran will understand the importance of coming there prepared to create a document that can prove to the world that this is a peaceful program,” he said.

Kerry said he would probably not be able to travel to Israel at the end of the week as he had tentatively planned to do.

Netanyahu announced on Sunday that Kerry would be visiting Israel on Friday, but Kerry said his schedule would not allow for it.

Kerry said he would probably make the trip after the upcoming Thanksgiving holiday.