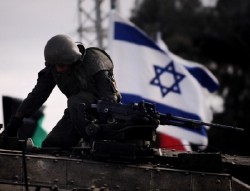 #2- Interviews with and footage of IDF soldiers from the Armor Corps preparing for ground operations in the Gaza Strip.  On the evening of January 3, 2009, the second part of Operation “Cast Lead” began as part of Israel’s continuing effort to stop Hamas’ rocket launching campaign against the residents of southern Israel. Click HERE to watch.