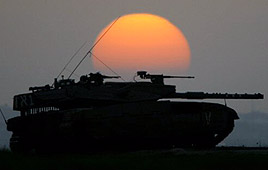 As the Israeli and American people are engulfed in the euphoria of the swearing-in ceremony of America’s 44th president, Barak Obama, the fact that eights mortar rockets were fired at Israel from Gaza today almost went unnoticed. The secular mainstream media did its best to play down the attacks, briefly reporting ‘ceasefire violations’ while stressing most of the rockets landed in Hamas-controlled Gaza.

In Israel, the severity of an attack is measured by its outcome, and in today’s case, with Hashem deciding the rockets will land short of their intended target was enough for Israel’s media to proclaim them ‘infractions’, perhaps ‘violations’, nothing more. After all, no one was injured or killed so in essence, it is as if it never took place.

Perhaps as quickly as America forgets its last president, Israelis will forget what the situation in the south was some three weeks ago, before Operation Cast Lead.

The population is apparently too preoccupied with the ceasefire to be concerned with 8 rocket attacks, not even questioning where the “immediate and stern response” has vanished to. Yes, the air force did fire back a bit, but there was no stern response and there was no crushing blow to “restore and ensure our future deterrence” against future unprovoked rocket attacks against our civilian population centers.

The news on Tuesday night is addressing only one issue, the new American president. Without dispute, this is a global event but at the end of the day, the obsession with the American leadership seems to serve as a welcome deterrent from the events that should be occupying our attention, once again, permitting Israel’s leaders to divert the national attention away from the pressing realities of the unfinished Gaza War.

Ironically, what should draw our attention goes unnoticed in the media, the fact that the theme of the presidential inauguration is synonymous with recognition of a G-d, a Supreme Ruler and the need for prayer. This aspect of the American pomp-and-ceremony is intentionally shunned, for we mustn’t permit the leaders of the Modern State of Israel to permit themselves to get too carried away with the old ways of yesterday, the tradition that has sustained Am Yisrael throughout the years of golus.

We merited seeing many miracles in Gaza, and those capable of realizing the threats faced by soldiers in Gaza as well as the close to 1 million southern residents. They are living testimony to the Divine Intervention that has once again delivered us safely from those who seek to destroy us. To our dismay, our secular leaders who yearn to compel a nation to accept their shallow ways are now once again seeking to undo the miracles, day-by-day, and we hope that they will not succeed in their mission, avulsing an entire nation from its current state of loftiness chas v’sholom.

The media will continue selling the ceasefire and its merits, filling Israeli homes with TV visions of Gaza, showing the ‘horrors’ inflicted on the ‘innocent Palestinians’ by the IDF as they sought to snuff out the enemy. It is truly sad that a nation has reached a point where the propaganda machine of a barbaric enemy penetrates their hearts on a deeper level than the suffering of brothers and sisters, who for eight years have endured, paying a heavy price, and today, almost merited being delivered from that evil foe but were prevented from doing so by their own leaders.